Korea braces for worst as TPP is signed

Korea braces for worst as TPP is signed 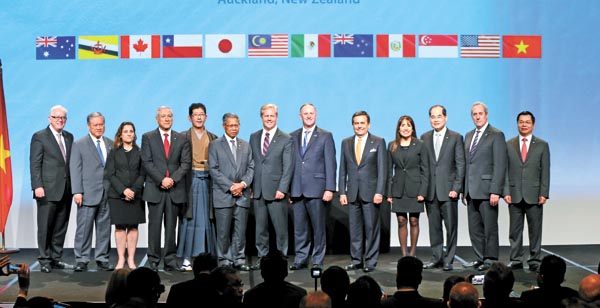 Trade delegates celebrate the launch of the Trans-Pacific Partnership (TPP) at a signing ceremony in Auckland, New Zealand, on Thursday. A total of 12 countries, including the United States and Japan, signed the agreement. Korea did not join the partnership and a U.S.-based research institution warned that the country’s exports could suffer. [AP/NEWSIS]

The 12-member Trans-Pacific Partnership (TPP) was officially launched with a signing ceremony in Auckland, New Zealand, on Thursday.

While many of Korea’s trading partners, like the United States and Japan, are celebrating the new trade pact, Korea, which is not part of the TPP, is concerned about the possible impact on its already struggling economy.

According to the U.S.-based nonprofit Peterson Institute for International Economics, Korea could see annual exports shrink roughly 1 percent, or $11 billion, as of 2030 compared to before the TPP. As a result, the country’s economy could shrink 0.3 percent, or $8 billion, during the same period.

The mega-FTA among 12 countries is expected to go into effect starting next year, although each country must ratify it.

“The TPP will erode that country’s advantage in U.S. markets under the Korea-U.S. Free Trade Agreement,” the two professors wrote in the report.

Among the TPP members, Japan is considered the biggest rival to Korea because the two countries make many of the same products. As a result, TPP members might switch from Korean to Japanese goods, the Korea International Trade Association’s research arm, the Institute for International Trade, said in a report released Thursday.

“In particular, the TPP will intensify export competition between Korea and Japan, and may even widen the gap with Japan,” said Je Hyun-jung, a senior researcher at the institute. “The place of origin chapter of the TPP eliminates tariffs on all raw materials and intermediary products [harvested, processed and shipped] in the 12 member countries.”

Automobiles, auto parts, crude oil, petrochemicals and semiconductors were the five most traded goods as of 2014 among the 12 TPP members, according to data from UN Comtrade. The five products accounted for 30.6 percent of total trade among the 12 countries in 2014.

Korea is also an exporter of automobiles, auto parts, petrochemicals and semiconductors.

“Korea should move faster by considering the mid- to long-term impacts on local companies,” Je said.

The Korean government has maintained that bilateral FTAs already in place, including the Korea-U.S. pact, will make up for non-membership in the TPP. Under the Korea-U.S. FTA, Korean-made cars have been imported tariff-free into the United States since Jan. 1, and local-brand electronics also benefit from a drop in tariffs with the International Technology Agreement.

Korea has only expressed an “interest” in joining the TPP.