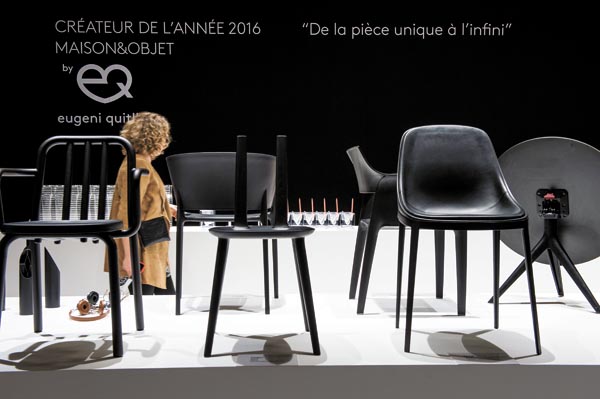 Black chairs in the booth of Eugeni Quitlett, who was named Designer of the Year for the January edition of Maison & Objet Paris. [Anne-emmanuelle thion]

For fashion buffs, it was time to dress up in designer outfits and uncomfortable heels, looking camera-ready for haute couture fashion week.

But for design-lovers, they wore their most comfortable shoes and headed to the five-day home and lifestyle fashions trade fair Maison & Objet Paris, which kicked off Jan. 22 under the theme “Wild.”

To get a glimpse of the upcoming trends in artful living ranging from interior design and furniture to fragrance and tableware, M&O Paris is the place to be. As this is one of the world’s largest trade fairs, about 10 times bigger than the trade fairs often held at COEX in southern Seoul, so comfortable shoes and wheeled suitcases are a must.

About 3,000 design companies and ateliers participated in the January edition of M&O Paris. The fair is a biannual event with the September edition focusing more on decor while the January event includes more furnishings. 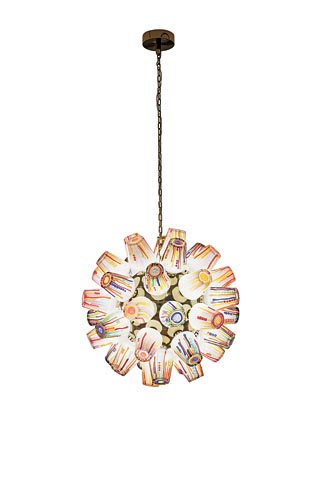 Lasvit, a manufacturer of unique glass items and lighting installations, had one of the most popular booths at M&O Paris. [Lasvit]

“Usually, buyers study a lot about what to see using our website and what kind of companies they will look for and arrange their visit, so this kind of flooring helps them a lot,” said Marina Faye, one of the organizers of the event. “Because once they visit the venue, especially for first-timers, it may not be as easy to find the booths you want to go to by just looking at the map in your hand, so we made good use of the carpets.”

But even with the help of the carpets and arrow signs, the halls are so large - with a total area of 246,000 square meters (60.8 acres) - it’s easy to get lost, especially when you are blinded by so many different kinds of design, furniture and fabrics, and busy thinking about how to redecorate your house when you get back home.

Hall 7, which was the hall featuring the “Wild” theme, was especially bustling. For each edition, the M&O Paris selects the theme of the season by analyzing trends and consumption behavior. According to the organizer, “Wild” was selected to encourage designers to “return to the forest and reset” while breaking away from the “world formatted technology, urbanization and excessive domestication.”

The M&O Paris also selects the Designer of the Year, recognized for setting the trends of today. For the January edition, the honor went to designer Eugeni Quitllet from Spain, who was attracting vast hordes of visitors with his unique exhibition in Hall 7.

“Maison & Objet is a platform that is showing what’s going on in the world in terms of home and lifestyle design,” said Quitllet. “It shows what is the next trend and what is the next emotion, next shape, idea, the way of thinking and above all, what is the last creation. So the fact that they chose me as the designer of this year makes sense to what I’m doing, too. Because I believe I represent that in this moment.”

Quitllet’s designs when put together become an installation, but individually each one is simply a product with its own function. His designs basically illustrate the interaction between unique pieces and mass production. But when it’s a unique piece it’s a product, and when it’s mass-produced it becomes an artwork.

For example, he designed a set of transparent vase blocks, each of which can function as a vase individually, but when all are put together the creation looks beautiful enough to be displayed as an installation piece.

“It’s one-of-a-kind yet works to infinity,” explained Quitllet, saying that the vase blocks can be added infinitely.

“The same thing applies to these pencil holders,” he said as he showed this reporter around his exhibition hall. “When putting theseidentical looking pencil holders all together, they can function as a sculpture piece, but individually, it’s just a pencil pot. This can also go to the infinite.”

“Even if it’s mass-produced or produced once, I put the same effort, the same passion into it. And I wanted to show that in this exhibition,” he added. “At the end of the day, what’s important is what you share and what you give and what you give is a little bit of love. That is shown in my logo, which is a shape of a heart.”

The concept of infinity for Quitllet is always present in his work because for him, design is a way to share.

“It’s a way to make something for everybody,” he said.

Meanwhile, all the chairs he designs are simple and black. It’s because he believes the color makes a chair stand out.

“I don’t care about the object,” he said. “The object is just the medium to get to somewhere else. It’s a vehicle to go to another emotion.”

This is why one of his chairs - a black one, of course - has rectangular-shaped legs that look like a picture frame.

“The person sitting on it becomes the piece of art and the chair is just an object,” he said.

Last year, Quitllet was in Seoul to give talks about his design philosophy at the Dongdaemun Design Plaza in central Seoul.

In the eyes of the Designer of the Year, Korea has “huge potential in terms of design,” because it is a country of “new technology.”

“Koreans are very free and they are not attached to a particular process. But at the same time, you have the tools and possibilities to do everything with technology,” said Quitllet. “You have Samsung, automobiles and so much and if you bring a bit of art into that, I believe you can do so much better.”

Korean design houses have always participated in M&O Paris, with the largest turnout at last year’s September edition. This time, the Korean presence was somewhat smaller in scale, with only 13 designers or design houses participating, many as part of the government-run Korea Craft and Design Foundation. Also present was the design studio Lago, which produces coloring book-like scratch boards, and a paper-folding design house called IKSK that’s based both in France and Korea.

Also at the fair was Korean ceramic artist Hwang Kap-sun, whose works stood out among a sea of European tableware. He designed a line of sophisticated porcelain tableware called Aureole for the 269-year-old German company Furstenberg.

Despite the small Korean presence, their impact was quite large. In the Hall 6 Beloved section, swarms of visitors surrounded the booth of the Korean firm Lago. The secret was including an experience zone allowing visitors to have a go at scratching away at the scratch boards, slowly revealing beautiful nighttime views of famous landmarks such as the Eiffel Tower and the London Eye.

“You can use this fountain pen-like stylus and scratch away the black ink-covered landscape picture,” explained Hwang Won, marketing manager for Lago. “Slowly, the ink scratches off and a colorful illumination picture will appear in front of your eyes.”

According to Lago Design, the products are an alternative to the hugely popular coloring books for adults that have been a trend recently. The products come in various sizes, and consumers can hang them on the wall or to send them as souvenir postcards.

“We were here last year together with the Seoul Design Foundation,” said Hwang. “The foundation, which is run by the government, selected 12 newly rising designers to support them participate in M&O Paris. We were picked as one of them and we shared a section of a booth with the other designers.”

This year, Lago decided to participate independently, although there were no successful orders after last year’s fair.

“Last year, there was huge interest in our product,” she said. “It was only our first time, but there were so many buyers showing interest. We even heard from Harrods in London and got to the paperwork, but unfortunately the deal fell apart as we couldn’t match the conditions. But it was a good start and that’s why we decided to come back this year.”

Although Lago didn’t receive any support from the Korean government this time, the company was able to buy the booth space at a lower rate since it was a new participant at the fair as well as an independent booth.

“I heard from other designers who are doing well in Europe that we have to take the time and come many times to be recognized,” said Hwang. “That’s what we’ll do here and keep meeting new buyers and consumers at M&O Paris.”