Yun Dong-ju (1917-45) is a rare Korean poet whose works are acknowledged for both their literary value and public appeal.

Even if you are not an avid fan of history or literature, most Koreans will have come across one or two of his works in their lives.

Born to a not-so-wealthy family, Yun is known to have dreamt of being a poet during the darkest time of Japanese colonization (1910-45).

After leaving behind a number of beautiful pieces of lyric poetry, which weren’t published until after he died, the unfortunate prodigy ended his all-too-short 28 years of life behind bars in Fukushima, Japan, where he was imprisoned for allegedly participating in independence movements. 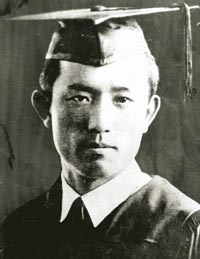 Yun ended his life at the age of 28 in a Japanese prison. [JOONGANG ILBO]

The lamentable story of Yun’s life is being resurrected for the first time ever on the big screen, 71 years after his death.

Lee Joon-ik, the mastermind behind historical flicks such as “The Throne” (2015) and “King and the Clown” (2005), crafted a humble yet sincere black-and-white film about the patriotic poet titled “Dong Ju: The Portrait of a Poet,” for a reported cost of less than 600 million won ($503,000).

“It was a few years ago when I decided to make a movie about Yun when I saw a commemorative tombstone on the campus of Doshisha University in Kyoto, Japan,” Lee said Jan. 28 at a press event.

Although it would have been possible for a towering figure like Lee to make a grandiose statement about the poet by crafting a splashy, big-budget costume drama, Lee decided to maintain his initial determination to keep it low-key.

“I never considered making this film in color because our memories of Yun, the pictures we see of him, are all in black and white. I didn’t want to infringe on that,” Lee said.

“In particular, pouring an enormous expense into reproducing the colonial era while making a film about Yun seemed like a great disrespect to him,” he added.

Instead of focusing only on Yun - who was played by up-and-coming actor Kang Ha-neul - the film sheds new light on an overshadowed independence fighter named Song Mong-kyu, Yun’s distant cousin whom he grew up with.

“It was hard to make a drama solely about his life, which is why I think no film or drama has been made about him during the past 70 years,” Lee said. “Then I thought if I focused on the relationship he had with Song, a brave independence fighter whose effort wasn’t acknowledged as much as Yun’s, it would make a great story.”

In the film, Song, powerfully played by Park Jung-min of “Bleak Night” (2010) and “Tinker Ticker” (2013), is portrayed as an eager, hot-tempered young man who is not afraid to take action against the Japanese regime.

But while he is facing danger in the field, Song insists Yun stay put and write.

Feeling inferior as well as afraid, Yun sits in front of his notebook, unraveling his inner agony and sense of shame on paper, giving birth to his most acknowledged works like “Confessions” and “Self-Portrait.”

Cleverly intertwining Kang’s recitation of Yun’s poems, with the background stories behind each, the film delves deeper into the aspiring poet’s mind and the unimaginable agony he felt at those times.

Lee explained he was able to pull off this film with the help of the screenplay, written by director Shin Yeon-shik.

“I was able to film this movie pretty easily with the help of Shin’s literary knowledge and talent as a writer,” Lee said.

“Although I was afraid, pressured and frightened to make a film about Yun, I tried to let go of the pressure. If I got too tense, it would have ruined the film,” he added.

The film opens nationwide on Feb. 18.