Review: Good guy in ‘Prosecutor’ is the same old guy

Review: Good guy in ‘Prosecutor’ is the same old guy 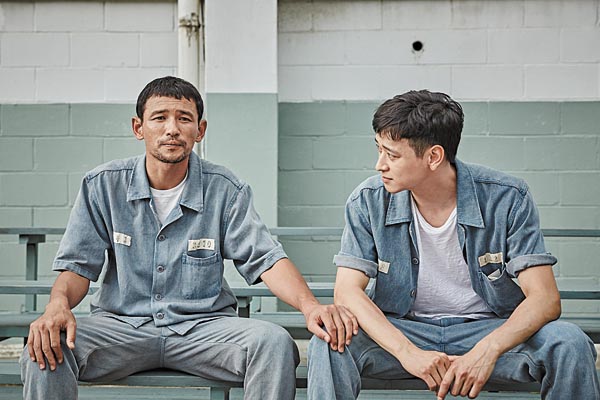 When watching the just-released action comedy “A Violent Prosecutor,” it’s hard to shake the feeling that the film is trying to catch up with Korea’s latest film trend, albeit belatedly.

Directed by newbie filmmaker Lee Il-hyeong, the film follows an upright prosecutor named Jae-wook (Hwang Jung-min) who ends up in prison and falsely accused of killing a suspect who was found dead after undergoing rough interrogation.

While finding a way to take revenge on his boss, the would-be politician who set up Jae-wook in the first place by persuading him to admit the charges, he teams up with Chi-won (Gang Dong-won), a pretty-faced swindler with a long criminal record who knows a thing or two about the ongoing case.

By tipping him off with some insider information, Jae-wook gets Chi-won freed from the cell, making the best use of his legal knowledge.

From then on, Chi-won becomes an avatar for the still-imprisoned Jae-wook, trying to dig up enough evidence to open a retrial for the case.

The best part of the film is Gang’s comedic performance as a mischievous con man, which is highly in contrast to the solemn priest apprentice he played in last year’s film “The Priest.”

Unlike his image as a chic model-turned-actor, his character as a blustering liar who insists to his naive girlfriend that his Busan dialect derives from the Pennsylvania region where he attended Wharton School is truly entertaining.

However, Hwang’s demanding and wacky prosecutor character is far from being original, as versions of it appeared on the big screen in many forms last year, best represented by “The Advocate: A Missing Body” and “Inside Men.”

Especially since Hwang won accolades for portraying a righteous cop in last year’s No. 1 hit “Veteran,” another version of the same character feels very redundant.

An unlikely matchup of the enforcer of the law and the one he should be chasing is also something we’ve seen already in “Inside Men.”

So in the end, the film’s charm has to be found in its comedic aspect.

In addition to Gang’s performance, attention-grabbing sidekicks played by Park Sung-woong, Kim Byung-ok and Hwang Byung-kook make the film an easy-to-watch option at the box office during Lunar New Year.