Kim Jong-pil takes a shot last July at a golf club in Goyang, Gyeonggi. It was his first golf outing in seven years since suffering a stroke. [KIM CHOON-SIK]

It was just a few days before my 80th birthday in December 2008. I woke up one morning and found myself unable to feel my right leg and badly stuttering. I was taken to the hospital and checked in immediately.

A few days before then, I had gone golfing with a few people from my hometown, Buyeo, South Chungcheong. Delighted to see familiar faces, I overdrank, which led to a stroke.

I can only blame myself for what happened. I crossed the line, and since then I’ve been confined to a wheelchair. 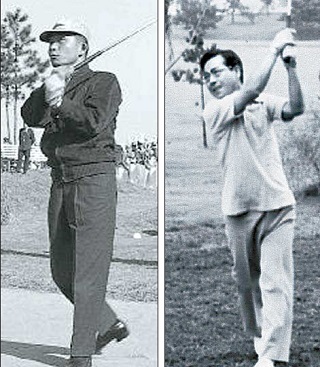 Golf allowed me to exercise regularly and was a way of keeping my health in check. But after I was put in a wheelchair, I had to stop. However, last summer, seven years after I gave up golfing, I was once again able to stand on the green, my hands firmly grasping a driver.

I could stand thanks to the help of a special-purpose cart my acquaintances built for me.

I always keep in mind a line from “Youth,” by American poet Samuel Ullman, which reads: “Years may wrinkle the skin, but to give up enthusiasm wrinkles the soul.”

I’ve always tried to be outdoors as much possible, and to build up my muscles.

Returning to the golf course after a seven-year absence - my last outing was at a golf club in Goyang, Gyeonggi - I breathed as if with nature. Assisted by a special-purpose golf cart, it took 70 minutes for me to reach the green from the tee box.

But the fact that I was standing on the green again, breathing in the fresh air, meant that I was still alive: It was a ritual that confirmed my being.

I first acquired a love for golf in July 1961, after the May 16 revolution [coup]. Some of my colleagues wanted to avoid playing golf due to the perception that is was a luxury sport, but I took them out to the range anyway. After all, I thought, people need to relax to work harder.

I never had a golf lesson and learned to play all on my own. I even came up with the JP-style swing, named after my initials. My best score was 2-under, when I played in the mid-1980s.

Playing golf can help shed light on a man’s personality, and even his social and political views.

In that regard, playing golf with former President Park Chung Hee is something I will never forget. After the May 16 revolution [coup], a few of our colleagues demanded that the country’s golf courses be plowed over to be used as farmland - an idea I vehemently opposed.

I reasoned that no potential overseas investors would take any interest in a country that didn’t have a single golf course. My argument convinced Park, and soon after he began to enjoy the sport as well.

Park’s golf style reflected his personality: It was efficient and detailed. I have fond memories of drinking makgeolli (rice wine) and sweetened soda with him after the game. On the green, he didn’t like talking about heavy subjects like state affairs, nor did he like to bet on games.

Samsung Group founder Lee Byung-chull formed a golf club known as the Wednesday Gathering and often played on Wednesdays at a country club in Anyang, Gyeonggi.

The way he played also reflected his business management style. His was systematic and delicate. When he took a good shot, he would say, with a big smile on his face, “I am not playing nice for you, am I?” It made the people around him laugh.

One day in 1990, I went golfing with Kim Young-sam, the leader of the opposition Unification Democratic Party at the time. It was right before we agreed on a three-way merger with Kim’s party, my party and the ruling party.

A day after our game, the newspapers carried a photo of Kim falling on his hip following a failed shot with a big smile on his face. The press speculated Kim and I had discussed the merger, but it actually hadn’t even come up.

I also often played golf with the former Japanese prime ministers. Among them, Nakasone Yasuhiro comes to mind; we had nurtured our friendship since the 1940s and had made it an annual traditional to go golfing on Aug. 1, at a country club in Nagano Prefecture.

My favorite golfer is Park Se-ri, who won the U.S. Open Championship in July 1998, when Korea was struggling in the aftermath of the Asian financial crisis.

Her victory gave us hope that the country could bounce back from any difficulties we faced, so I invited Park, her parents and her colleagues for dinner at my prime ministerial office.

I’ve sometimes been criticized for enjoying such an expensive sport, but I tell my doubters to stop interfering. It’s a personal hobby that kept me healthy well beyond my 70s.