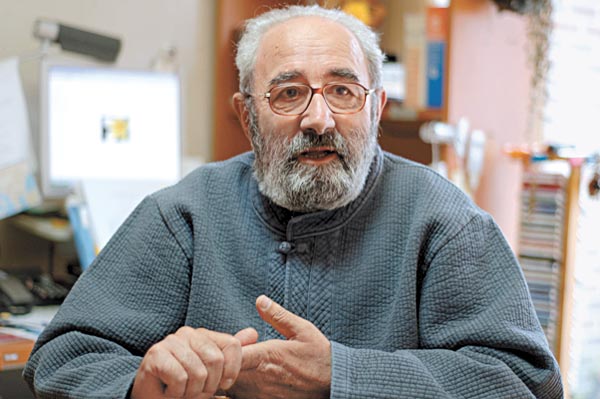 Didier t`Serstevens, an 85-year-old Belgian priest who is best known as the father of Imsil Cheese, became a Korean citizen nearly six decades after arriving in Korea. [JANG HYEOK-JIN]

Nearly six decades after arriving in Korea, Didier t`Serstevens, a Belgian priest and pioneer of the local cheese industry, became a Korean citizen.

The 85-year-old Brussels native is best known as the father of Imsil Cheese, which helped introduce cheese to a country that barely knew it and couldn’t afford it in the impoverished aftermath of the Korean War (1950-53).

Using the Korean name Chi Chong-hwan, he has lived here for 57 years and was finally registered with the Ministry of Justice as a Korean national on Thursday.

Chi told the JoongAng Ilbo the previous day, “Under a special consideration, the Justice Ministry has recognized me as a person of distinguished service, so I am glad I am getting Korean nationality. I am thankful that the Korean government recognizes me as a Korean.”

He added, “This is a wonderful present for me.”

Chi said that ever since he was ordained as a priest and arrived in Korea, “I have considered Korea as my home country.”

The Catholic priest, the youngest child of an aristocratic Belgian family, was ordained in 1958, and arrived in Korea by boat in 1959.

Chi first settled in a parish in Buan County in North Jeolla to do missionary work. To help farmers in the area, he showed them how to build dikes to block off the ocean and reclaimed land twice the size of Yeouido.

Chi felt deeply betrayed when he saw the farmers lose the land to loan sharks or to resort to gambling. From that moment he vowed “never to interfere in the lives of Koreans.”

In 1964, Chi was sent to a smaller and poorer parish in Imsil County in North Jeolla and met a farming community that was struggling to survive.

He was asked why Belgium was so rich and Korea so poor. And this time, he vowed to intervene “just a little bit.”

He began to raise a pair of mountain goats.

He had a eureka moment that cheese could be made from goats’ milk and that industry could give the town a new means of supporting itself.

But he grew more ambitious once he started on the project.

From his parents in Belgium, he received $2,000 to build something of a cheese factory: a cave built of mud bricks to ferment the cheese. From the start, the enterprise was built through trial and error and it took over three years. He visited his home country, France and Italy to learn the process. Imsil was finally able to produce Korea’s first cheese in 1967.

At the time the only cheese in Korea was leaked into the black market from U.S. military units.

Imsil Cheese expanded its distribution to top hotels in Seoul and began raking in profits. Korea’s first pizza shop opened in Myeong-dong in central Seoul in 1972 using mozzarella made by Imsil. Over the next decades, Imsil was the acknowledged master of the country’s cheese industry.

Now, Imsil Cheese has more than 20 franchises and 70 brands. Korea’s first cheese-making village has developed into a tourist destination with an Imsil Cheese Theme Park.

In the 1970s Chi joined hands with the democratization movement and worked with fellow expatriate religious leaders against the Park Chung Hee regime.

In 1976, Chi was diagnosed with multiple sclerosis, which paralyzed his right leg. In the 1980s, he set up a shelter for the disabled called the Rainbow Family near Jeonju. He was awarded the Ho-Am Prize in 2002 for his contributions toward the rehabilitation of the disabled and established the Rainbow Foundation with the prize money.

Chi receive his citizenship at a ceremony at the Justice Ministry along with 83-year-old Father Patrick Noel O’Neill from Ireland, who since 1981 has helped run homes for the disabled and those marginalized by society.

Justice Minister Kim Hyun-woong attended the ceremony and thanked the two foreigners for their contributions to the economic development of Korea and their help for the disabled. “I hope in the future that a culture of love and sharing will take root in our society and you will play an even greater role in enabling it to happen,” Kim said.

When asked if he still works for Imsil Cheese, Chi replied, “For the people who are working there now, it is best that I do not interfere.”

Chi said he attended the Imsil Cheese Festival last year, which 100,000 people visited. “And I thought, I haven’t wasted my time.”