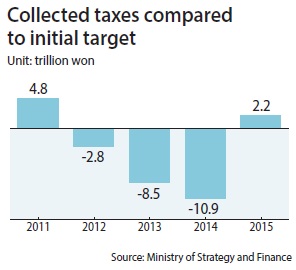 The money was raised despite unfavorable conditions in which the economy has been struggling with continuously falling exports and fragile consumer confidence.

It is 2.2 billion won more than the 215.7 trillion won that the government aimed for at the beginning of the year, according to the Ministry of Strategy and Finance on Friday. Although it’s only 1 percent more than the government’s target, it was a huge improvement over previous years, considering that the size of the shortfall has been expanding.

“Despite difficult circumstances including the Middle East respiratory syndrome (MERS) and prolonged drought, aggressive fiscal policies including early execution of government spending, tax reforms including cutting back on tax benefits, have helped the success of increasing the tax collection to end the shortfall,” said Finance Minister Yoo Il-ho.

The active real estate and stock exchanges last year as well as higher taxes on cigarettes contributed to the increase. However, some worry that the government has been filling its coffers by squeezing the pockets of average workers even by reforming the tax codes.

The shortfall, which started in 2012, grew from 2.8 trillion won to 10.9 trillion won by 2014, which was an all-time high, as challenging economic problems reduced the amount of taxes that the government was able to collect to meet its annual targets set at the start of the year.

The government based the increased tax collection largely on the improved asset market - real estate and stock market - and the recovery in the domestic market as well as taxation reforms.

The government collected 3.8 trillion won or 47.3 percent more than in 2014 from income made on property sales to 11.9 trillion won. It was the biggest increase by size collected among other income taxes.

An active market was also credited with the increase. Thanks to the aggressive key interest rate cuts that lowered the burden on mortgage loans since the second half of 2014, the property market enjoyed bullish growth last year as 6.8 million properties were sold, which was an 18 percent increase year-on-year.

Additionally, the government was able to collect a total of 4.7 trillion won or 1.6 trillion won more than the previous year from stock exchanges, a 51.6 percent year-on-year growth.

The government raised 6.7 percent or 1.7 trillion won more in labor income compared to the previous year to 27.1 trillion won. It said this was largely due to the improvement in the job market that hired more people, where the number of regular employees increased 3.6 percent year-on-year to 12.6 million and workers’ per capita monthly income rose 3.1 percent.

But some experts say other factors have played in as well.

“The government has made changes to how the government calculates the year-end tax settlements that have increased the tax burden of average workers,” said Kim Kap-soon, a Dongkuk University professor and head of Korea Taxpayers Association.

There have been growing complains that the new tax code that was adopted last year has reduced the tax deductions and returns that average workers get in their year-end settlement while increasing the government tax collection. Labor income tax during the last nine years has grown nearly 9 trillion won or 50 percent. It was only 18.4 trillion won in 2011.

The government has also lowered the bar of taxable incomes on comprehensive tax from 300 million won to 150 million won. As a result, 17.6 trillion won of additional income was included as taxable.

This year, however, the government is less optimistic on how much it will be able to bring in.

“We have set this year’s tax collection target at 222.9 trillion won, which would be roughly 5.1 trillion won more than the tax we were able to collect last year,” said Cho Yong-man, head of the fiscal management bureau at the Finance Ministry.

“This is a conservative approach as we expect stock and property transactions to shrink compared to a year ago this year.”