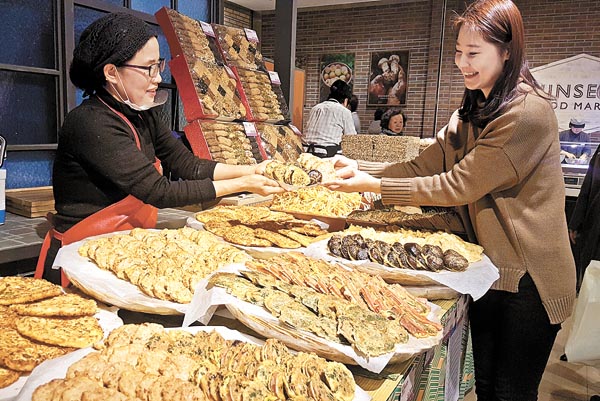 A day ahead of the Lunar New Year holiday, or Seollal, Lotte Department Store’s main branch in Sogong-dong, central Seoul, was filled with customers looking for gift sets they could actually afford.

While the store offered numerous kinds, from traditional cookies, rice cakes and red ginseng to Korea’s famous hanwoo beef, most seemed hesitant to take the pricier gift sets to the registers.

Sluggish economic growth and cheap raw material prices have put the breaks on the nation’s economy since last year, and overall consumer sentiment has slowed in response. This has impacted how Koreans spend, particularly on the requisite gifts for loved ones during the nation’s biggest traditional holiday.

“We feel like some products aren’t selling as well as last year,” a staff member at the department store said. “The products that are selling the best are cheaper or have been discounted.”

The situation was no different for gift sets filled with daily necessities like toothpaste, soap and shampoo, which are cheaper and seen as more cost-effective.

“Compared to last year, it’s true that sales [of basic sets] started to dry up, but we are managing to catch up with our previous sales level by offering more affordable and practical combinations of products,” said another staff member working at the daily necessities section of the store. “Those priced under 20,000 won [$17] are the most popular.”

“I used to buy fruit and dried fish gift sets for between 50,000 won and 60,000 won during the past few Lunar New Year holidays, but after browsing online, I concluded that I can’t afford them this time because their prices have gone up to 90,000 won, which is too much of a burden for me,” said Song Hye-dong, a 56-year-old housewife. “That made me choose things like shampoo and body products, which are cheaper and more practical.”

Those receiving gift sets are also feeling the squeeze.

“What was hanwoo last year changed to fruit baskets, and even for fruits, what used to be a mixture of different fruits last year changed to an apple set this year,” said Park, a 40-year-old living in Seoul. “Different sets are being sent from the same person, so I think pockets have really shrunk over the year.”

Although people’s budgets for holiday gifts have gotten smaller, local retailers have adjusted their strategy by expanding their range of lower-end products. Major department store chains have held discount events for some types of products this week.

All Lotte branches are offering discounts between 20 and 60 percent until Saturday on some 70 popular products, including meat, fruits, seafood and health supplements. The discounts are applicable on the first 500,000 sets sold.

The department store included 20 percent more lower-end gift sets on its shelves compared to last year. It also replaced much of the expensive hanwoo products with cheaper imported beef sets.

Hyundai Department Store is also offering discounts between 15 and 30 percent on some 60 products at 15 branches nationwide until today.