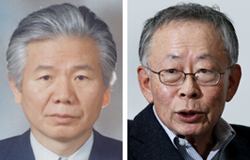 A think tank similar to the U.S.-based Brookings Institution may be burgeoning in Korea.

The organization, called Yeosijae and sponsored by Cho Chang-gul, the founder and honorary chairman of Korea’s No. 1 furniture maker Hanssem, has been registered as an incorporated foundation, the company announced on Monday.

Cho, 76, donated 600,000 Hanssem shares worth about 100 billion won ($84 million) to the foundation last March and announced he would donate a total of 2.6 million company shares - then worth about 4.4 trillion won - to the Hanssem Design Beyond East & West Research Foundation, which will be responsible for Yeosijae’s creation.

The donation was intended to go toward creating a think tank in Korea that would provide a strategic way forward for the country, playing a role not unlike that of the Brookings Institution and the Heritage Foundation in the United States.

The name of the think tank, Yeosijae, translates to “a house fitting for the era” in Korean.

The think tank seeks to light the way forward for East Asia, fostering leaders and developing research strategies for the Korean Peninsula and unification.

“The experts with the right knowledge and experience should form a think tank that is able to build national strategies in a time like today, when the state of affairs in East Asia changes every day,” Cho said when announcing his donation last year.

Yeosijae plans to focus on four major future projects that Cho announced last year: to create a new civilization that harmonizes the values of the East and West; to drive sustainable change in thinking for the good of society; to make good use of digital technology and revolutionize lifestyles; and to respond wisely to rapid changes in China and create an East Asian way of life.

“Chairman Cho has assessed that the difficulties Korea faced in modern history - including the Japan-Korea Annexation Treaty, the 1950-53 Korean War and the state of separation between North and South Korea - derived from a lack of national think tanks,” a Hanssem official said.

“While he will not be directly involved with determining Yeosijae’s direction, his role on the board of directors signals his willingness to support the institute as much as possible.”