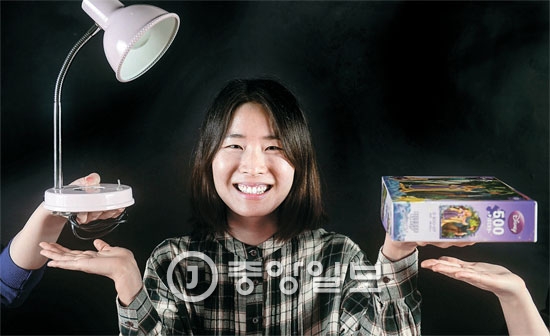 Lee Ji-hye, 28, exchanges goods at the barter-and-trade sale organized by No Waste. She brought puzzles and exchanged them for a desk lamp. [JEON MIN-KYU]

At a local barter-and-trade sale earlier last month, a small frying pan was among the items up for grabs.

The pan’s seller was one of the six members who participated in the sale, an initiative by No Waste, a group that promotes preservation and sustainability by minimizing waste in the city.

There are two commonalities the group’s members share: a “jailhouse” of unused goods and a container full of wriggling earthworms. 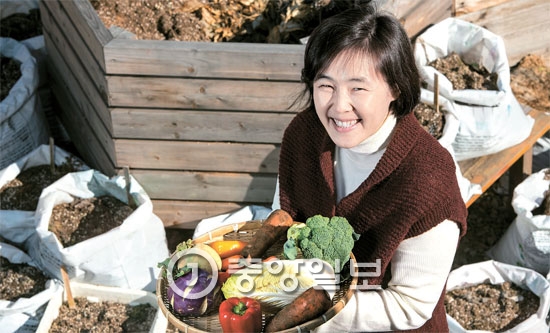 Lee Bo-eun, 48, holds up a basket of seasonal produce grown in an urban farm in Seongsan-dong, western Seoul, that will be sold at Marche, a farmers’ market. [JEON MIN-KYU]

The purpose of the jailhouse makes sense upon explanation: goods that are not used for more than two months are locked behind closed doors to be bartered at the next No Waste gathering.

“The only rule in the gathering,” Lee explained, “is to choose the winning bid [for an item] by majority vote after hearing all the bidders’ appeals. The gathering is held to find the right owner of an unused good to reduce waste.”

But what purpose do the earthworms serve?

“I bury leftover food on both sides of my worm compost bin, which becomes the worms’ food when they wake up. Living with earthworms solved my leftover-food problem,” she said.

Lee keeps a 40-by-30-centimeter (16-by-12-inch) compost bin in the corner of her bathroom. It is important not to overload it, she said, adding that it has helped her determine just the right amount of food to prepare each time she cooks.

The No Waste group dates back to when Lee was a teenager. As she was washing dishes one day, she couldn’t help but notice the dish-washing soap bubbling up to fill the whole pot.

Going on to college, she engaged in student-led activities on upcycling, the idea of reusing items in such a way that their value is enhanced.

Then, last year, she began channeling her passion for sustainable living by sharing detailed No Waste practices online and on social networking sites.

“No Waste’s influence extends beyond our members,” she said. “They go on to create their own gatherings in other regions. Ten people in the world protecting the environment could grow to 100 or 1,000 people, making a sustainable earth possible.”

But Lee’s No Waste isn’t the only grass-roots group for urban environmentalists. A farmers’ market called Marche is held at Marronnier Park in Daehangno, central Seoul, every other Sunday.

Produce at the market ranges from sesame leaves grown on the rooftops of buildings near Hongik University in western Seoul to cherry tomatoes picked from a farm in Gangwon managed by a former businessman who quit his job to get into agriculture.

Market representative Lee Bo-eun, 48, said the farmers who come to the market typically fall into three categories: urban farmers who grow fresh produce on rooftops or in community gardens; businessmen-turned-farmers who have moved into rural areas to work their own fields; and young farmers in their 20s and 30s who sell fruit jam and dried fruit made from produce grown on their parents’ farms.

“At Marche, farmers can sell their products at a good price without going through the hectic distribution process, and consumers can buy organic products at an affordable price,” Lee said.

Marche is also an ideal place for urban farmers who haven’t found appropriate markets to sell their products, which can vary and whose quantities are small.

But Marche’s real value is in the human relationships it has helped form in the midst of a busy urban environment.

“The farmers share tips on growing sesame leaves in the city and making tomato jam, and in the process, they find friends in one another,” Lee added. “Living in the city can get a bit stuffy and gray, and Marche celebrates farmers and consumers to counter that dullness.”

Marche actually began as a celebration in 2012, when Lee and her neighbors started the local market to sell rooftop-grown vegetables. (Lee had been growing lettuce, sesame leaves and chili peppers since 2011 on a rooftop in Munrae-dong, western Seoul.)

Marche now welcomes about 4,000 participants each month. Farmers who grow a little bit of everything sell about 300 types of products.

“In French, marche means market, and when you trace back the origin of the word, you find that it points to people-to-people relationships,” Lee said. “That’s exactly what Marche is for - to rekindle the human relationships that have been lost or neglected while trying to keep up with the city’s pace of life.”

Still, the market representative added that her project is far from finished.

Her goal is to create Marche-like farmers’ markets in each metropolitan area throughout the country.

“Imagine neighbors sitting down for dinner at one table with meals cooked from the produce they grew together,” she said. “Life would be slower, but much, much happier.”