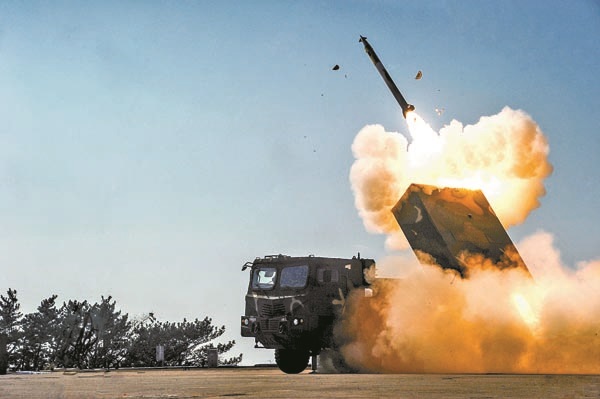 The next-generation multiple-rocket launcher Cheonmu is used in a drill Wednesday. According to the Army, it is a key system in striking down North Korean targets. [NEWSIS]

Defense Minister Han Min-koo on Friday called for a heightened military defense posture in light of a possible long-range ballistic missile launch by North Korea this month, highlighting the importance of an “active” response by South Korean troops.

A long-range North Korean missile is expected to have a range of up to 13,000 kilometers (8077 miles) - far enough that it could potentially fall into South Korean airspace if it were to deviate from its trajectory.

During a meeting with senior military officials, Han said the military must be “physically and mentally ready” to respond to any emergency situations, pointing to North Korea’s fourth nuclear test on Jan. 6.

The South Korean military, the minister said, will make the best of its shared reconnaissance capabilities with the U.S. military in the event that North Korea follows through with the missile launch.

According to a military source, Defense Ministry officials confirmed during the meeting on Friday that Pyongyang had made considerable progress at its launch site in Dongchang-ri in the northwestern part of the country.

He declined to elaborate further, however, citing the classified nature of the information.

“Only the final decision maker in Pyongyang knows when the launch button will be pressed,” an official from the Defense Ministry said, referring to North Korean leader Kim Jong-un. “Given the level of progress in launch preparations and the fact that Kim Jong-il’s birthday falls on Feb. 16, it is likely that Pyongyang will fire a missile sometime before Feb. 16, on a day with good weather.”

Inter-Korean relations were dealt a significant blow this week after Pyongyang informed the international community on Tuesday that it plans to launch what it called an Earth observation satellite between Feb. 8 and Feb. 25 sometime between 7 a.m. and noon Pyongyang time - which is 30 minutes ahead of Seoul.

While the North has claimed the launch is for its space program, South Korea and the international community widely view it as a pretense for a ballistic missile test.

Pyongyang’s announcement concerning a possible missile launch has led to louder calls by Seoul and Washington for stricter punitive measures.

However, it is questionable how much leverage discussions on additional sanctions will have in deterring Pyongyang.

On Thursday, U.S. Defense Secretary Ashton Carter said in a speech at Nellis Air Force Base in Nevada that the United States would use its missile defense systems to monitor an expected missile launch by North Korea, Reuters reported.

However, he declined to elaborate on possible moves and reiterated that North Korea’s nuclear weapons program remained a concern.