Director delves into Korea’s dark past

Director delves into Korea’s dark past 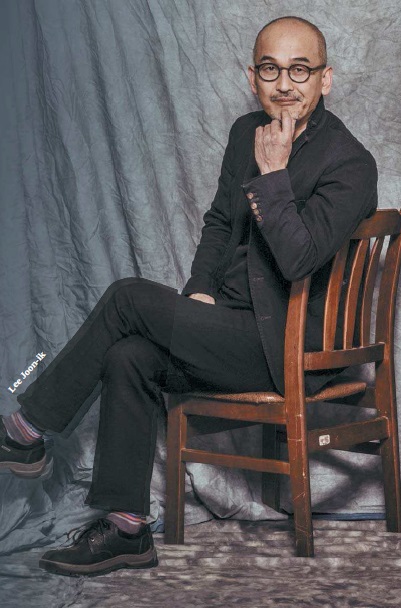 Director Lee Joon-ik, known for popular historical films such as “The Throne” (2015) and “King and the Clown” (2005), is back with a new movie that delves into the tragic history of the Japanese colonial era (1910-45) and the resistance struggle.

The film focuses on the life of poet Yun Dong-ju (1917-45), famous for his work “Sky, Wind, Star and Poem,” and his friend and rival Song Mong-kyu (1917-45). The movie examines the turbulent time in history by looking at the relationship between the two writers, who expressed their resistance to Japanese rule in their words.

Making this movie itself was a challenge to Lee, as Yun has never been depicted as the main character of a film before. He also decided to shoot the film in black and white.

“This is a very new attempt, different from the commercial movies that I have filmed,” Lee said during a recent interview with the JoongAng Ilbo. The movie is set to be released on Feb. 18.

Q. Why did you decide on a different way of filming?

A. I went to see the monument for Yun when I visited Kyoto for a film festival in 2011. I felt the need to make this movie based on the fact that his monument is standing in another country. And looking at a black-and-white photo of Yun, I felt like I was looking at my portrait when I was in middle or high school.

I started to think that many love the reflections of themselves found in Yun’s poems. I thought it would not be appropriate to place this character under the pressure and burden that come with commercial movies. So I tried to make it not so commercial-like.

What did you focus on in terms of the script?

I asked [producer Shin Yeon-sik] if he could write the script as I planned on making the movie on a low budget, and he said yes. I asked him to focus on the relationship between Yun and Song. Of course, I wanted to include the idea that Japan should be sorry for its militaristic ways.

It looks like you focus on both Yun and Song.

I did that intentionally. A movie cannot be made solely about Yun without Song. Solely with Yun, the dramatic elements are missing. That’s why there hasn’t been any movie on him in the past 70 years. Song is more like a carnivorous activist, and Yun is more like an herbivorous idealist. He is also a guy’s guy who is very decisive, who writes a poem like “Confession.”

Why did you focus on looking into the detailed dynamics between two people in your movie, after you used such a tactic in “The Throne”?

Some people’s real ideas come out while building relationships with others. Yun, who couldn’t help feeling some inferiority complex due to the decisions and actions of Song, were evident in his poem “Self-Portrait.”

The reason why I put that poem in the scene where Song gets arrested in Kyoto by the Japanese police was to show the relationship between the two who shared the same ideas. Without Song, Yun would not have been able to exist.

Why do people know about Yun but not Song?

Yun’s life doesn’t seem so amazing, but everyone remembers because what he left behind is beautiful. On the other hand, Song’s life was beautiful, but no one remembers it because there is nothing left. I also didn’t know much about Song before. I made the movie because I was ashamed of that. I wanted to shed light on Song’s existence by making this movie.

Don’t you think that the beauty of Yun’s poems come from the fact that he also felt ashamed?

Poet Jung Ji-yong told Yun when he came to see him that, “Knowing that you are ashamed is not something embarrassing. It is embarrassing when you don’t know [you should] be ashamed.” Yun’s poems embody that idea of shame. He laments the fact that there is nothing he can do in poems like “Confession,” “Prologue” and “A Poem I’ve Written Easily.” His poems are about his physical struggles, not some ideas he had.

What are the fictional elements in the movie?

What is your favorite poem of Yun’s?

It is disrespectful to rank poems. But if I were to choose one in spite of that, I would choose “Little Brother’s Image Impression.” [It has a line that says he] becomes a human, and how amazing that is.

It means more in this world where there are so many animal-like people. There is a scene that relates to this poem, and that’s my personal favorite.

Did you really cry while filming the scene where Yun and Song blurt out their feelings while being questioned by a detective?

The video of me crying my eyes out was even included in the video that shows the making of the movie. The two shed tears of bitter grief in front of a police report given to them to sign. Then they exploded with emotional confessions. The actors’ work in that scene was so powerful, it felt like I was looking at their souls.

What can young people learn from the tragic lives of Yun and Song?

No matter how painful youth is these days, it isn’t as bad as what these two had to go through. I think youngsters can be relieved and learn to bear the pain and sorrow they have to go through when they see the struggles the two characters had until the end as they try to be true to themselves.