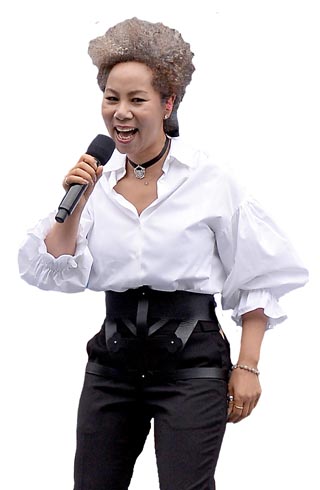 The talent agency of the 59-year-old singer told Ilgan Sports, an affiliate of the Korea JoongAng Daily, Wednesday, “We never heard about it (tax evasion) and we’ll clarify our stance after checking out the facts.”

It has been reported that the singer has been accused of evading about 5 billion won of taxes by an acquaintance surnamed Park.

Park reportedly submitted documents to prove tax evasion by the singer in 2008 to the Supreme Prosecutor’s Office.

In fact, Insooni was ordered to pay an additional 800 million won in taxes in 2008 by the National Tax Office after filing a return with a reduced amount of income.

Insooni debuted in 1978 and she is still one of Korea’s influential singers. She is synonymous with hope because of her personal background. She was born to an African-American GI father and a Korean mother. The father left the family when she was young. The singer said she grew up with racial discrimination because of her skin color.