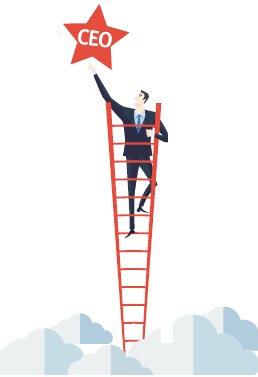 Executives are often referred to as the “stars” of a company, but many are lonely, stressed and overworked, according to a survey conducted by Economist, a business magazine affiliated with the Korea JoongAng Daily. 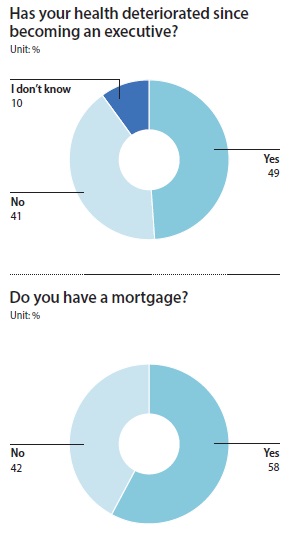 Kim, 51, managed to become a star three years ago. At the time, one of Kim’s colleagues decided to retire after learning he had been passed up for an executive position once again. 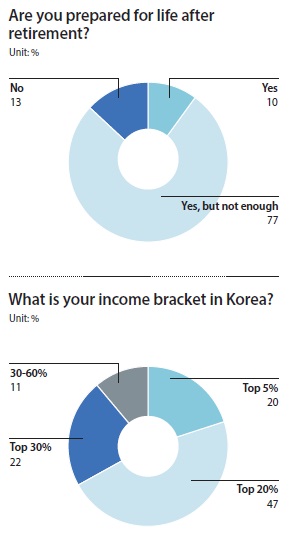 “A star shines brighter when all is dark,” were the last words of the colleague before leaving the company. Kim still carries the bitterness of those words in his heart.

“I managed to survive the fierce competition, but I feel like I’m treading on thin ice every day,” he said. 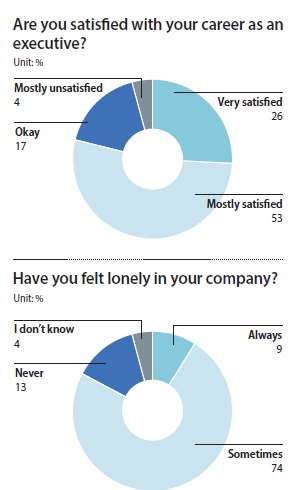 Becoming a star is obviously a distant dream for new hires, but for department heads, the achievement is a possibility that all too few actually see during their careers. According to a report released by the Korea Employers Federation about promotions in 2014, only 7.4 out of every 1,000 employees become executives after dedicating about 20 years to a company.

Although these stars are often the envy of those beneath them in rank, there is more to their daily lives than meets the eye. Economist’s survey shows that the stars are often anxious about the temporary nature of their position and exhausted by having to work through the weekends. When asked about their plans for the future, very few saw themselves as the next chief executive officer of their company, and most felt financially unprepared for retirement despite an annual salary that averaged over 100 million won ($83,000).

The magazine surveyed 100 executives from 66 conglomerates and 34 small and medium-size enterprises from Jan. 10 to Jan. 23 by email. The 100 executives were 50.5 years old on average and had 4.1 years of work experience as a company executive.

The biggest cause of stress was a feeling that they didn’t have the capacity to be any better at their job, 47 percent of respondents said, followed by criticism from a superior and the possibility of being laid off, at 18 percent each.

When asked about their career aspirations, only two respondents said they were absolutely certain their next step would be CEO. Six rate their chances of becoming CEO as over 50 percent, while 41 saw their chances as between 10 and 50 percent.

“Talent can bring you up to the executive level, but in order to become CEO, the only answer is sheer luck,” said a respondent from a conglomerate.

The results also explained why executives often respond to missed calls with messages like “in a meeting.” Nine out of 10 respondents had two to three meetings every day, while over half had meetings with customers or partnering companies that involve alcohol at least six times a month.

“I have lunch or dinner with industry-related officials roughly six times a week, and even if I don’t have such appointments, I wait in the office just in case before going home,” said a marketing executive at a pharmaceutical company.

Nearly half of the executives said they think about handing in their resignation either sometimes or every day.

Many also reported not having enough time to either study their companies or de-stress from the job.

“A financial executive must also know about other fields such as public relations and marketing,” said an executive from a financial company. “I run out of time to be acquainted with all parts of the company.”

Fifty-two say they are only able to spend between two and five hours a week on self-enrichment activities.

When asked what changes in their current working environment would make them happier, 67 answered more success in their career. Seventeen people said guaranteed holidays and vacation days would make things better.

“[People say] corporate culture has changed, but there are clear implications if an executive takes a regular leave or holiday,” said an executive from a commercial bank.

Most executives earn large annual salaries compared to other workers in Korea, but that doesn’t make them free from worries about the future.

Eighty said their average annual salary ranged from 100 million won to 300 million won. Eighty also said they lived in a house they own, while 17 live on a jeonse (lump-sum deposit rent) contract. Three lived on a wolse, or monthly rent, contract.

Even though executives are considered high-income earners, 58 said they’re still paying off their mortgage. Only 10 of the respondents answered they are well prepared for life after retirement. The most popular choices for after retirement were re-employment (30) and starting a new business (29). Sixty-one people said they often purchase lottery tickets in hopes of striking it rich.

Most of the current executives, or 52, said the most important qualification to becoming a star was work performance.

“In any company, a person with the best knowledge of a specific field is an executive,” one of the respondents said. “Personal connections in the company, leadership and sociability are important, but the foremost requirement as an executive is the work capability and actual outcome.”