Executives ‘only as good as subordinates’

Executives ‘only as good as subordinates’

The work performance of an executive is directly related to how well the middle managers do their job. “The life strings are held not by the company owner but by the subordinates,” said an executive who took part in the survey by Economist.

The 100 executives who participated in the survey mostly said they were content with their subordinates.

On a question asking about their satisfaction with the head of each department, 56 percent answered “mostly satisfied,” while 6 percent said “very satisfied.” Some 30 percent said they were “okay,” while 7 percent were “mostly dissatisfied.”

Most executives were more content with deputy heads than heads of the department. For the deputy heads, 8 percent responded “very satisfied,” and 62 percent said “mostly satisfied.” One executive at an insurance company, a subsidiary of a conglomerate, hinted that “senior department heads with only a short term left for promotion are virtually a competitor [of executives].”

When asked if there is an employee they would want to lay off, 54 percent said no, while more than 46 percent said yes. There were, though, some executives who confessed they are most stressed when they feel disregarded or alienated by their subordinates.

Executives were also asked the type of employee they would want to work with. The survey presented 20 different positive and negative characteristics, such as meticulous and honest for positive, and pessimistic, lazy and incompetent for negative. Respondents were asked to select four from the positive and negative categories.

The most favored turned out to be “responsible,” subordinate employees with 63 votes. It was followed by creative, with 56 votes; competent, with 46 votes; and positive, with 30 votes.

The most disliked characteristics were “irresponsible,” with 42 votes; incompetent, with 39 votes; lazy, with 33 votes; and impolite, with 31 votes. Employees who make a lot of mistakes or who were deemed likely to betray also earned considerable votes.

“Those who seem likely to stab a knife in my back are the No. 1 target of precaution,” said an executive from a strong midsize enterprise. 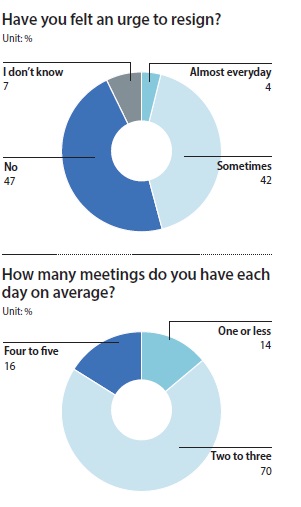 Some 66 percent of executives said Korea is unfair. According to 56 percent of the respondents, “fair” society referred to a place where fair chances are given throughout one’s life where rewards correspond to one’s efforts. Another 23 percent said it is where one’s full capability can be utilized in Korea without limitations in freedom or creativity, and 18 percent said it is a considerate society for the disadvantaged where chances are given even after failure.

A large number of executives’ felt “politics” was the most urgent sector to undergo reform. While multiple responses were possible, 84 percent of those surveyed chose politics. Education and labor were also areas sought to be in need of reform, with over 20 percent of votes. Economy was listed fourth with 20 percent.

Asked what is the most important social responsibility of a company, 49 percent of executives said employment was the first choice, while 30 percent felt a contribution to the development of the nation’s economy was important. Fourteen percent felt returning some of the companies’ profits to society was crucial. However, a majority, or 58 percent, assessed companies are not doing their job well, while another 11 percent of respondents said they are doing a “terrible” job.