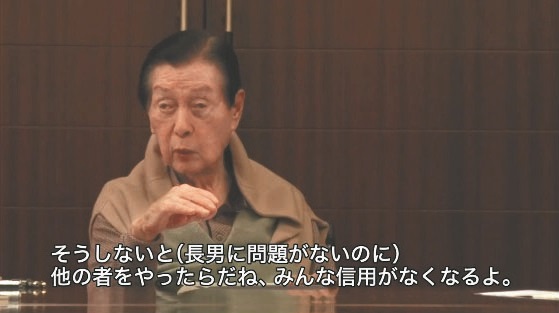 Lotte Founder Shin Kyuk-ho says in a video clip released Wednesday that handing control to anyone other than his oldest son would damage public confidence in the group.

Shin Dong-joo, the older brother and loser in the battle for control of the Lotte Group last year, released a video interview with his father, Shin Kyuk-ho, founder of Lotte Group, on the homepage of his supporters’ website.

It was the latest move in his uphill fight to wrest control of the group from his younger brother Shin Dong-bin, incumbent chairman of Lotte Group.

The interview was uploaded on a homepage called “A group demanding normalization of Lotte Group (http://www.l-seijouka.com),” created by SDJ Corporation, which is chaired by Shin Dong-joo.

It includes 12 questions to the founder and his answers, including his opinion on who should succeed him as chairman, his business philosophy and memories about the building up of the Lotte Group. The interview is assumed to have been conducted in Shin’s office in the Lotte Hotel in Sogong-dong, Seoul, where he stayed for days after the fraternal dispute between Dong-joo and Dong-bin was disclosed to the press last year.

In the 16-minute interview conducted in Japanese, the 95-year-old Lotte founder says his successor will be his eldest son Dong-joo.

“It is obvious that my eldest son Shin Dong-joo is going to be the successor,” Shin said in response to a question, “which is common sense in Japan and Korea. Otherwise, [we] will lose credibility.”

The posting of the interview was part of Dong-joo’s campaign to show that his father’s mental state is sound and he wants him to take over the group.

A case is currently ongoing at the Seoul Family Court to appoint a legal guardian for the Lotte founder. Shin Kyuk-ho appeared last week to testify in the first hearing. A second hearing is expected to be held next month.

Shin Jeong-sook, a 78-year-old younger sister of the founder, brought the case to court in December, raising the need to choose a legal guardian. Shin Dong-bin submitted a document that backs the sister’s claim while Shin Dong-joo opposed the appointing of a guardian.

Insiders at the Seoul-based Lotte Group dismiss the legitimacy of the video interview.

“The interview is a collection of edited, limited parts, which makes it difficult to make a judgment on his mental state,” a Lotte associate told the JoongAng Ilbo. “Since the founder has been surrounded by SDJ Corp. associates ever since last October, the authenticity of the interview is questionable.”

“The interview was posted in order to send a message to employees in Japan,” said an associate of SDJ Corporation. “If it was aimed at having an impact in the guardian case, the interview would haven been conducted in Korean, but it is not related to that case at all.”