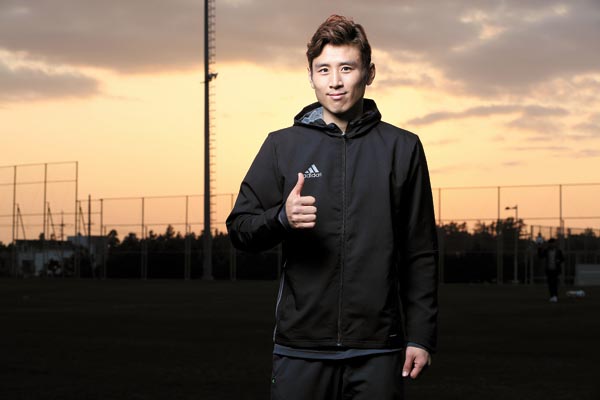 It’s not about his impressive performances, but rather his dedication to training. The 26-year-old midfielder is said to have climbed the 1,950-meter high Mount Halla dozens of times while playing for the K-League Classic team from 2007 to 2010.

When a youth team player for Jeju United asked whether the tale is true, Koo, who was visiting the island in December, didn’t hesitate to answer.

Koo, who now plays for German Bundesliga’s FC Augsburg, said he once climbed the 7-kilometer course of the mountain in just 50 minutes because the hiking paths were about to close.

“Back then, his teammates were surprised to see that, and would say Koo is a guy who is crazy for training,” an official from Jeju said.

With his hard work, Koo is now one of the top midfielders representing Korea. In the German Bundesliga, he has played more than 120 matches with 17 goals in six seasons, and with the Korean national team, he has been featured in 51 matches and netted 16 goals.

“Koo wasn’t born with full of talent, but he has climbed up from the bottom with his efforts,” said his agent Choi Woul-gyu.

Koo, who is also member of bronze-medal winning Korean team in the 2012 London Olympics, was only 1.46 meters tall when he entered middle school. Hoping to get taller, the Nonsan-born footballer said he drank milk every day instead of water. Now, he stands 1.82 meters.

While playing for Boin High School in Seoul, Koo was diagnosed with anemia and usually had to take medicine before playing in matches. He still led the school to runner-up finish in Jeju Baekrok Championship in 2006. But in his final season, he was hospitalized for a month because of his condition, which cost him a spot on a university team.

The following year, Koo was able to sign with Jeju United, and in 2010, he led the team to second place after scoring five goals and delivering 12 assists. While climbing up mountains was a staple training method for Koo, he has also attributed his successes to watching clips of Scottish midfielder Darren Fletcher.

Before moving to West Bromwich Albion in the English Premier League in 2015, Fletcher played with Manchester United for 13 seasons, playing alongside Korean football icon Park Ji-sung.

Korean football insiders call Koo a “man of the field manual” because he never behaves erratically. His father served as a master sergeant at the Air Force, and Koo exhibits a similar level of discipline as a footballer, even in Germany.

After taking the top scorer title in the 2011 Asian Cup in Qatar, Koo transferred to German club Wolfsburg, and then moved to Augsburg and Mainz. He rejoined Augsburg again this season after collecting a club record transfer fee of 5 million euros ($5.6 million).

Augsburg, where defender Hong Jeong-ho and forward Ji Dong-won also play, had just one win, three draws and eight losses, but has been improving in its last five matches with four wins and one draw.

Led by Markus Weinzier, Augsburg has also advanced to the Round of 32 in the Europa League, which is a first for the club since its foundation in 1907. It is scheduled to face EPL side Liverpool, led by German coach Jurgen Klopp, next week.

“When we were playing in the final group match in the Europa League, I told teammates Hong and Ji that this should not be the final day we wear the Europa League uniform,” Koo said. “I’m already excited to meet Liverpool. We will be also better in the German Bundesliga in the second half.”

Despite his recent successes, Koo is still trying to put the 2014 season past him. Though he became the youngest captain for the Korean national team during a World Cup, Korea was eliminated during the group stage.

“I cried a lot,” he said. “I couldn’t show my best skills at the World Cup. I felt pain even after the tournament was finished.”

His father Koo Gwang-hoi often tells his son that being on the national team means devoting everything to the country, which he did while in the military. The senior Koo was blinded in his right eye while in the Air Force.

Maybe because of his father’s message, Koo has been giving his all during his performances on the national team. In October 2015, he scored a goal against Kuwait in the second round of the Asian qualifiers for the 2018 FIFA World Cup. A month later, he also found the net against Myanmar.

In 2016, Korea will play in the final round of the Asian qualifiers for the 2018 FIFA World Cup in Russia. Koo said he is ready.

“I know the final round of the World Cup qualifiers is like a battlefield,” he said. “I will play for Korea until the end.”