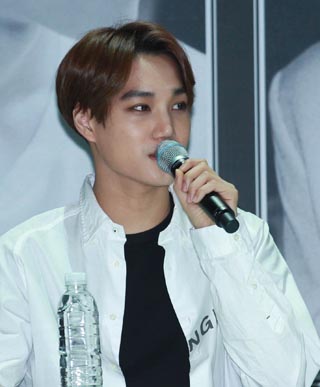 Kai, a member of the K-pop boy group Exo, will join his bandmates for a concert in Vancouver, the second stop of the group’s North American concert tour.

The 22-year-old Korean singer missed the first concert in Dallas on Wednesday local time due to delayed visa issuance.

My Music Taste, the official promoter of Exo’s North American tour, apologized for Kai’s absence in Dallas, saying, “We’ll give refunds to the fans in need.”

Exo’s North American tour is titled “Exo from Planet #2 The EXO’luXion Tour” and the nine-member group will stop by cities like Los Angeles, Chicago, New York and Vancouver.

It is the first North American tour for the popular K-pop group.

After the North American tour, Exo plans to hold concerts in Seoul next month.

Exo broke into the music scene in 2012 and has been riding high despite some troubles.

Three Chinese members left the group in 2014 and 2015 after they filed lawsuits against their agency, SM Entertainment, to nullify the validity of their contracts, but the group has stayed strong since.

Exo won many awards last year and earlier this year at various music festivals, including the grand prize at the Seoul Music Awards held in January.