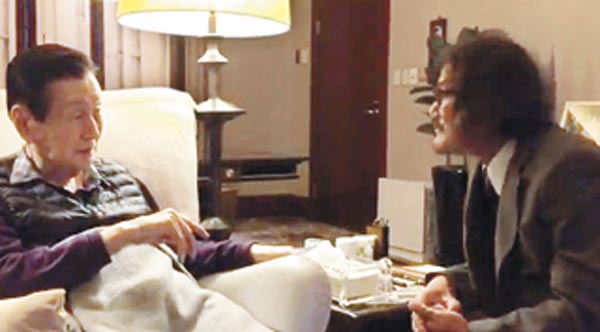 Shin Dong-joo, the older brother and loser in the battle for control of Lotte Group last year, fired another salvo against younger brother Shin Dong-bin on Thursday, part of the siblings’ continued wrangling over the mental health of their father, Lotte Group founder Shin Kyuk-ho, and the rightful control of the conglomerate.

The older son posted a video of the patriarch playing Go with Cho Chi-kun, the country’s best-known professional Go player, to back his claim that the founder is mentally sound.

The move came after Shin Dong-joo unveiled a different video Tuesday showing the 94 year old appointing the elder son as his business successor.

Incumbent Chairman Shin Dong-bin of Lotte Group has dismissed the founder’s statement as illegitimate, saying that the older brother is exploiting the nonagenarian’s “unstable mental condition.”

The series of revelations is also intended to gain a favorable ruling for an ongoing hearing to determine the mental state of Shin Kyuk-ho.

Shin Jeong-sook, the 78-year-old younger sister of the founder, brought the case to the Seoul Family Court, claiming there was a need to appoint a legal guardian for him. Shin Kyuk-ho appeared in court earlier this month to testify in the first hearing, and a second hearing is expected to be held next month.

In the edited video posted to a website run by Shin Dong-joo’s own company SDJ Corporation, the founder engages in small talk with the famous player ahead of the game.

The patriarch asks where Cho lives and who is currently the top-ranked player in Korea.

Still, the video alone doesn’t seem sufficient to prove the founder’s mental state, as it only runs about a minute.

SDJ Corporation commented on the website that the video was taken on Dec. 4 at the founder’s office in Lotte Hotel in central Seoul. The founder stayed there when the fraternal dispute between the brothers began last year.

“General Chairman Shin Kyuk-ho began sponsoring Cho Chi-kun in Japan 50 years ago and has shown interests in Go since then,” the website said, adding that his Go level is equivalent to the rank of amateur 4 dan.

Lotte Group said that the posting is nothing more than a campaign to win public opinion.

“Such actions are desperate efforts to gain the upper hand as the older brother’s claims hardly deliver credibility and reliability,” said a representative of Lotte Group who spoke on condition of anonymity.

“The ruling will determine the state of the founder,” the representative continued, “Those videos can not be considered as any sound evidence to support his claim.”