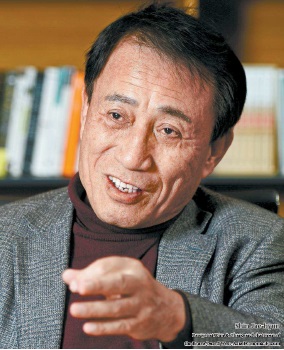 Shin Jae-hyun, chairman of the Korea-based West-Asia Economic Forum, became particularly interested in Iran in 2008, when the Ministry of Foreign Affairs named him ambassador for Energy & Resources Cooperation.

The United Nations Security Council imposed sanctions after Iran refused to suspend its uranium enrichment program in 2006. But Shin started a Korea-Iran association of businessmen.

He ran a congratulatory advertisement on Page 1 of the JoongAng Ilbo in 2012, when the two countries marked the 50th anniversary of diplomatic ties. He changed the name of the association to the West-Asia Economic Forum last year. At the time, it seemed wiser not to overly stress the Iran connection. “Many retained some repulsive feelings about Iran,” he explained.

After graduating from the law department at Seoul National University, Shin studied at New York University law school. He worked at Kim & Chang ever since until 2014. He served as ambassador for Energy & Resources Cooperation for four years.

Shin has consistently maintained that Iran needs to be treated fairly so that Korea could benefit after the sanctions were removed. His insistence sometimes boomeranged in the past. But now his early efforts are starting to pay off and he has become a top Iran expert in Korea.

The JoongAng Ilbo sat down with Shin, 70, on Jan. 19, three days after sanctions on Iran were lifted, to hear about the atmosphere in the country and what strategies Korean enterprises should take to tap into business there.

Q. How do you think the scrapping of sanctions was possible?

A. There were unreasonable aspects about the restraints from the beginning. Although Western countries including the United States believed Iran had strong ambitions for nuclear armaments, I personally think it did not. The only confirmed fact is that Iranians built facilities for low enriched uranium for industrial use. All Iranian leaders I have met say Iran never worked to develop nuclear weapons. Some even swore on the Quran, a very serious act. Even so, the West slapped the strongest-ever sanctions, which devastated the economy. I think Iran’s government had no choice but to compromise when its people - the younger generation in particular - aspired to join the winds of change outside the country.

How will Iran develop?

Given the geographical location and history, Iran has the biggest potential in the Middle East. Its population stands at over 80 million and its land size is over 10 times that of the Korean peninsula. Over 60 percent of the population is young and it has a splendid ancient history. China could become a global economic leader in just three decades on the back of similar factors. Whenever I am asked how Korea achieved such rapid economic growth, I answer the secret is the country’s 5,050 years of history.

Is Iran that promising a market?

I have visited the country over 30 times since May 2008. Many Korean newspapers have released special reports on Iran, saying a construction market valued at over 100 trillion won ($83.96 billion) has opened up. Its true potential is ample but nothing will happen if Korean companies fail to do the right things. The country won’t just give out orders because you go there.

Then what should Korean companies do?

Companies in different fields are advised to find partners in Iran and join forces. Some fields that require cutting-edge technologies have been dominated by European enterprises. The relationship between Europe and Iran dates back over 200 years. Korea-Iran relations are only 30 years old. What’s fortunate is that Iranians have favorable feelings about Korea. Korea’s young people need to go beyond Southeast Asia and advance into Iran.

You visited Iran recently. What was the atmosphere like?

The majority of people I met said they were excited the market will be flung open. In fact, Iran was an enormously free country aside from its nuclear issue. The Korean government began allowing its people to travel overseas freely beginning in the 1980s but Iran has never seen such restrictions. Women’s rights are very advanced too.

What impact will the removal of the sanctions have on the situation in the Middle East?

The Gulf Cooperation Council, led by Saudi Arabia, has been the strongest group in the Middle East so far because Iran could not wield its influence. But the situation is set to change from now on. Saudi Arabia may already be on alert after relations between Iran and the West thawed. But I don’t expect Iran will take advantage of its new power to suppress the countries in the neighborhood.

How do you assess the Iranian market?

Iran needs to be seen not by its current market size but its potential. It has the biggest reserves of natural gas, petroleum and various minerals. Plus, it has a gigantic amount of land and human resources. Its academic level is high in mathematics, chemicals and medicine.

What’s the most promising field in the country?

Iran’s infrastructure - telecom, in particular - is extremely outdated after 40 years of sanctions. In Tehran, your mobile phone loses its signal when you turn a corner. The speed of the Internet is like Seoul’s in the late 1980s. A telecom infrastructure should be installed across the massive nation, meaning Korea has a huge opportunity. Tehran’s southern part is desert but contains ample underground water. The country has a severe water shortage problem owing to a policy mistake when it comes to underground water development. If the Korea Water Resources Corporation inks a partnership with Iran, we could advance into the field of water control in the country. Its railroad system is pretty old too, because development has been halted ever since World War II. The highway network is not complete and ports are not operating properly. Infrastructure requires enormous investment and development, which means the Iranian government has infinite projects to conduct in the future. State-run think tanks such as the Korea Development Institute, which has accumulated economic development knowledge and experience since the 1960s, should volunteer to lend a hand.

They love Korea and the Korean culture, which I sometimes think is too much. Soap operas - period dramas in particular, such as “Jewel in the Palace” and “Prince of the Legend” - are very popular. Since Iran has a limited number of channels and no bars, people inevitably watch dramas available on a few broadcasting stations in the evening. All Iranians talk about Korean dramas and if any of the actors featuring in them visited Tehran, an enormous crowd would gather. When Koreans were doing construction work in Iran in the past, they were very diligent and trustable. Thanks to that, Iranians have deep confidence in Koreans. Their preference for Korean consumer electronics is high. I heard young women tend to stack up Korean gadgets in an empty room years before marriage.

Doesn’t Iran have a grudge against Korea because we followed sanctions under pressure from the West?

I started frequenting Iran after being appointed energy ambassador in April 2008. By the time I was on my 19th trip in 2010, I had to explain the how Korea was forced to join the Western countries’ sanctions in a meeting with the high-ranking officials. Thanks to my persuasive explanation, they did not appear that angered. Iranians are highly realistic.

Some 2,500 Korean companies were exporting to Iran at the time and about 2,000 were on the verge of going bankrupt when the trade was severed. The Korean government explained the situation to the U.S. government and asked for its understanding of a payment system in the Korean currency. Under the system, the Iranian government opens an account under the name of its central bank with Korean banks and deposit the profits as a result of the bilateral trade in Korean won in the account. That way, both countries could maintain various trade deals despite the sanctions.

Even so, Iran may have been let down by Korea’s move.

Sanctions on Iran’s commercial bank Mellat Bank were scrapped recently. The bank filed suit in Seoul to overturn the Korean government’s designation of it as being subject to financial sanctions for its alleged involvement in Iran’s nuclear program and the court ruled in favor of Korea’s Minister of Strategy and Finance. Not only Iran but also Korea’s government officials must know the ruling was far-fetched. Mellat Bank has gone through so much pain. We need to make up for such a struggle. Some Korean shipbuilders breached contracts with Iran, not handing over the promised order. When Iran asked for references required to repair the vessels purchased from Korea, Korean shipbuilders just ignored the request. But their top executives told me that’s what life is like and asked me to do them a favor when the time comes for them to resume business with Iran.

What are Korean companies’ good and bad characteristics?

It’s hard for them to beat their Chinese counterparts in terms of prices. Korea even falls behind China when it comes to some areas of finance. But Iran’s government and its people are suspicious of large countries because Iran went through conflict with them throughout history. The country inevitably traded with China and Russia out of need before the sanctions were lifted but I think Iran also suffered a lot in dealing with them. Once I met a high-level government official and he told me that he realized Korea never invaded other countries. In that regard, Iran may have a good impression of Korea, which we need to take advantage of.

What should we be careful about?

You shouldn’t expect a free ride. You have heard the term “Merchants of Persia.” You need to approach them with an attitude that you want to cooperate out of whole-hearted sincerity.