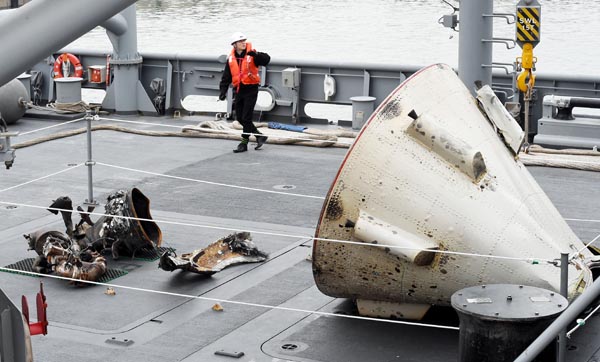 The South Korean Navy on Thursday revealed that it found what it believed was the debris of the propellant from the first-stage rocket from North Korea’s long-range missile launch, salvaged from the ocean earlier that day. The findings are seen here on the Tongyeong salvage and rescue vessel in Pyeongtaek, Gyeonggi. [NEWSIS]

The South Korean Navy on Thursday revealed that it had found what it believed was a part of the propellant from the first-stage rocket from North Korea’s long-range missile launch on Sunday salvaged from the oceans earlier that day.

A Navy official said that the debris was salvaged that morning some 140 kilometers (87 miles) southwest of Ochung Island, off the western coast of South Korea in the Yellow Sea.

The Navy has also salvaged pieces over the past several days that seem to link the second-stage with the first-stage rocket.

On Sunday, the day of the launch, what was determined to be a part of the fairing was found by the Navy about 145 kilometers southwest of Jeju Island. 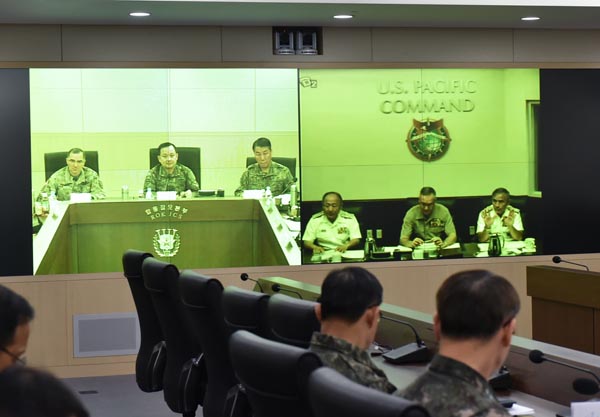 South Korea’s chairman of the Joint Chiefs of Staff (JCS) holds talks with his U.S. and Japanese counterparts on Thursday, when they agreed to bolster coordination following a series of military provocations by Pyongyang. [NEWSIS]

On Monday, debris from the first and second stages also were discovered southwest of Ochung Island.

The piece found on Thursday was found just north of the pieces found Monday.

On Sunday, North Korea fired a rocket at around 9:30 a.m. from its Tongchang-ri launch site, in Cholsan County, North Pyongan Province, which flew in a southerly direction from the country’s west coast, over the Yellow Sea.

The first stage detached over the Yellow Sea at 9:32 a.m., around 410 kilometers away from the launch pad. It exploded into approximately 270 pieces. Military officials here suspect Pyongyang may have enabled the first-stage booster to self-destruct on purpose.

“In 2012, our Navy was able to salvage what was believed to be debris from the first stage that fell into the West Sea, so in order to prevent this, North Korea may have intentionally exploded the first-stage propellant in the air,” a military official said.

The fairing detached at 9:36 a.m., 791 meters from Tongchang-ri, southwest of Jeju Island, and the second stage detached soon after, about 2,380 kilometers from the launch site and into the Pacific Ocean. North Korea announced that its Kwangmyongsong-4 Earth observation satellite was launched into orbit at 9:39 a.m.

“Our Aegis destroyer was able to detect the spots where the pieces fell in real-time and notified the Tongyeong [salvage and rescue] vessel,” a Navy official said. “We were able to find the debris after scouring the areas closely.”

The Navy also took advantage of its ROVs, remotely operated underwater vehicles, for the first time since they were deployed on the Tongyeong.

They also dispatched divers to extract the debris too small for the ROVs.

The South Korean military has been in close cooperation with the United States and Japan following the North’s missile launch, with the allies emphasizing the need for an increase in trilateral information-sharing.

On Thursday, the South Korean chairman of the Joint Chiefs of Staff (JCS) held talks with his U.S. and Japanese counterparts in which they agreed to bolster coordination concerning Pyongyang following North Korea’s missile launch on Sunday and its fourth nuclear on Jan. 6.

Adm. Harry B. Harris Jr., head of the Pacific Command, also took part in the talks.

The three military leaders, the statement read, “also agreed to coordinate further on mutual security issues to enhance peace and stability in the region.”

Lee remained in Seoul to maintain the readiness posture on the Korean Peninsula.

They are expected to discuss the deployment of additional U.S. military strategic assets and possibly the deployment of the U.S.-led Terminal High Altitude Area Defense system (Thaad) to the Korean Peninsula “at the earliest possible date.”

To bolster the combined defense posture against Pyongyang, the South Korean and U.S. Air Forces are conducting an air drill on special wartime infiltration operations.

The two-week long combat control team exercise will run until Thursday around Pocheon and Osan in Gyeonggi, according to the South Korean Air Force.