One man’s story, from comrade to prime minister

One man’s story, from comrade to prime minister

Kim Jong-pil tells his side of the story. [KWON HYUCK-JAE]

Kim Jong-pil is part of Korea’s modern history - often at the center of it and a primary witness.

The Kim Jong-pil story, which will conclude on Saturday, was a testimony of what he saw, felt and experienced over more than 50 years. To hear his account, the JoongAng Ilbo sat down with him every Saturday from October 2014 to November of last year.

It was an encounter with history. His first narrative was already full of drama, detailing his role and participation in staging a military coup on May 16, 1961.

“I was responsible for the promises of the May 16 revolution [coup]. Do you know the first clause of the pledge?” he asked me during our interview. 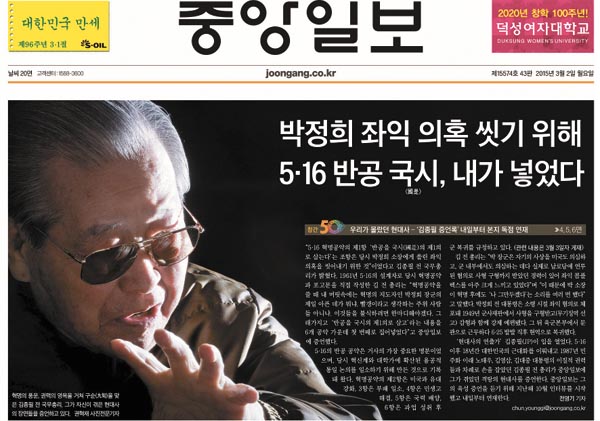 I responded without hesitation, “We take anti-Communism as the top priority.”

“President Park Chung Hee was once forcibly discharged from the military due to alleged connections with leftists,” Kim continued. “For that, a number of people in the military’s top echelon were suspicious about Park’s ideological standing.”

So to ease those worries, Kim advocated an anti-Communism stance as top priority.

“When Park saw the pledges of our revolutionary group, he said to me, “You put this clause in for me, right?”

His and Park’s actions on the dawn of May 16, 1961 were patriotic, he continued, carried out with the future of the country in mind.

“It was the same for Chinese leader Mao Zedong in his revolution. It all comes from a deep sense of patriotism that a man must do whatever it takes to revive the country and protect it from external threats.

“We stood up in order to open a new era for Korea and its kind people, who had accepted poverty as an unbreakable fact of life.”

A revolutionary and an artist, Kim remarked, shares one skill that is essential in their being: An ability to empathize with others. For that, he said, a man needs to have an artistic spirit to upend the pre-existing order.

“If you don’t have that sensitivity, you can’t put your life on the line for your objectives. That’s why politics is considered another form of art.”

Getting to know Kim Jong-pil was tantamount to understanding the nuances in his politics. He defined a good politician as a man capable of making bold determinations and possessing a long-term vision for the country.

Creativity is another secret weapon in leadership. When he flew to Tokyo to discuss the normalization of diplomatic ties with Japan, he cited a Japanese historical fable to make his point, to the delight of his Japanese counterpart. In the end, he managed to obtain $800 million in the form of compensation and aid from Japan for its occupation of the Korean Peninsula from 1910-45.

Kim’s narrative also fought hard against the idea that South Korea could have achieved rapid economic growth without the iron-fisted Park Chung Hee administration. By looking at an impoverished North Korea, it’s clear that argument is flawed.

While North and South Koreans share the same culture, history and language, North Korea has ended up as one of the most isolated countries in the world, with a dismal economy.

“To enjoy freedom and democracy, the people must be supported by a sound, strong economy,” said Kim, who long held the view that the economy should come before democracy.

With economic growth on the forefront of the country’s agenda, Korea began to excel in steel-making, ship-building, as well as in the auto, electronic, chemical and oil industries. To this day, such a feat by an impoverished nation has been rare.

He was also deeply involved in breaking the centuries-old social stigma against businessmen and merchants under a social culture that favored scholars.

“People used to denigrate businessmen in favor of scholars. But we broke that stigma with President Park Chung Hee encouraging businessmen to expand their investments and go overseas. And that laid down the cornerstone for the country’s economic growth.”

Kim also revealed what he thought of Kim Jae-gyu, at one time the president’s right hand man who assassinated President Park on Oct. 26, 1979.

“He was a paranoid maniac,” the former two-time prime minister said in anger. “On trial, Kim Jae-gyu made it sound as though he had killed the president out of democratic convictions.

“But in fact, he killed Park Chung Hee because he was simply upset and outraged that he had lost the power struggle to win Park’s favor with Presidential Security Chief Cha Ji-cheol.”

Even still, Kim Jong-pil remained the second-most powerful man during the Park government. “Park was not comfortable with me serving in such a powerful position. But he also found it discomforting when I was not around him.

“At first, Park didn’t have a hunger for power, and even said he would return to the military after the revolution. But after he had a taste of it, he began to change and employed his ‘divide and rule’ tactics. It was tough for me after that.”

Power is cold. A leader does not share his authority with anyone, even a confidant, and Kim Jong-pil was constantly monitored by Park’s subordinates.

But Kim was never ousted. “President Park had a naive side to him,” he said with a gentle smile. “Also, the fact that I was connected to him via the family line may have played a part in that.”

Kim was married to Park’s niece, Young-ok, who passed away in 2015 after more than 50 years of marriage.

Park Chung Hee’s sudden death in 1979 created a power vacuum and Kim soon emerged as a presidential hopeful. Yet, in all the years that followed, he never served as commander in chief.

“You have to fight for power,” I said. “Do you agree that you failed to win power because you were not as fierce as your rivals in your pursuit of it?”

“I don’t deny that my temperament eased over the years,” he responded.

Kim Jong-pil was one among the three Kims in the political arena, which included former Presidents Kim Young-sam and Kim Dae-jung. His cooperation in helping them win the presidency, he acknowledged, was meant as an act of atonement for the suffering the two men endured during the Park Chung Hee era.

“Kim Dae-jung was never a leftist or a believer in Communism,” he said. “He simply used communist sympathizers to his political advantage.”

On Kim Young-sam, he remarked, “Only he could have accomplished the ouster of the Chun Doo Hwan faction inside the military [a group known as the Hanahoi] and taken Chun Doo Hwan and [former President] Roh Tae-woo to court.”

“President Park Chung Hee once said his critics could come to his grave to spit on it,” he said. “I tell my critics that they can dig up my grave if they want, because I have nothing to be ashamed of.”

And here we end our 14-month journey together.