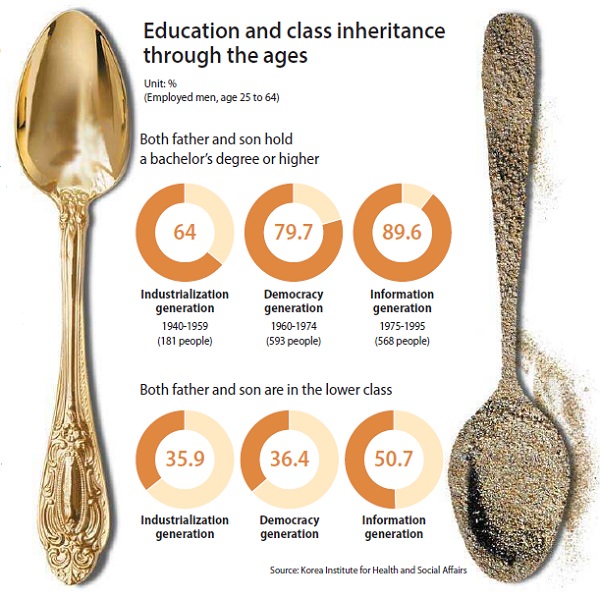 Mr. Choi grew up in poverty.

Abandoned by his parents and raised by his grandmother, he understood from a young age that the only way he was ever going to better his situation was if he got an education.

So he studied, day in and day out, and went on to obtain a bachelor’s and master’s degree in economics from Seoul National University (SNU), one of the country’s most prestigious institutions, before going on to get his doctorate at Columbia University in New York.

Now 56, Choi is the CEO of an asset management company.

But while his success story is a testament to the merit of hard work and education, it is not an uncommon narrative among the Koreans born before 1980.

Most wealthy Koreans inherit their assets from the previous generation, making their claims on obstacles in the transfer of wealth far from reality. In fact, according to a recent nationwide survey, the inheritance of class, in which parents’ wealth and social status determines the future of their children, has essentially become structuralized.

The study, conducted by the Korea Institute for Health and Social Affairs, is based on the “spoon class theory,” which classifies individuals based on the assets they inherited from their parents. The spoons - representations of Korea’s class divides - range from a gold spoon to silver and bronze, and finally, dirt.

Those raised in a wealthy family, which proves influential in helping them attain entrance at top universities and secure jobs, are considered to have been born with gold spoons in their mouths. Contrarily, the dirt spoon is synonymous with the Koreans born into poor families who had to earn their place in society rather than simply inherit it.

The results of the poll found that the spoon class theory not only existed in Korea but deepened with each successive generation.

For Mr. Ahn, a repairman and part of the dirt spoon class, it is a concept that is all too real, particularly in a society marked by a sluggish economy and intense social polarization.

The 23-year-old earns 1.7 million won ($1,412) a month installing and fixing elevators. His father never made it past elementary school and made ends meet as a construction worker. For Ahn, the idea of attending college was simply a luxury.

“It was hard for me to imagine entering university because our family’s economic status just wasn’t conducive for it. My only goal was to earn money,” he said. “I hope I can go to school when I can afford the tuition, but I am not sure if that day will come.”

The study showed that the persistence of poverty across generations has deepened, with 50.7 percent in the youngest generation answering that both father and son were in the lower class - an increase of almost 15 percent from the 36.4 percent who answered the same in the democracy generation.

In the oldest generation, only 35.9 percent answered that both father and son were considered in the lower class.

The inheritance of education intensified as well: The rates of men who graduated from university and had highly educated fathers were found to be higher in the younger generations.