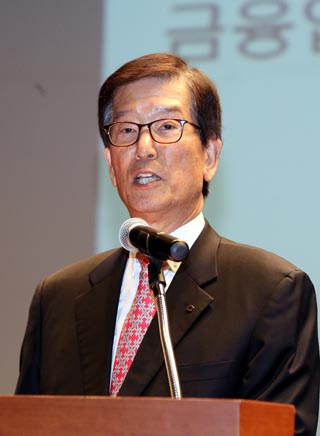 A banner hanging on a wall at the inauguration ceremony of the new chairman of the state-run Korea Development Bank (KDB) had an e-mail address.

Lee Dong-geol, the new KDB chairman, put up the banner with his email address, dglee@kdb.co.kr, in the conference hall of the bank’s main branch in Yeouido, southwestern Seoul, on Friday. The email address was meant as a simple message of his willingness to strengthen communication with front-line bankers.

“I wanted to encourage employees of all levels to directly contact me via email on different kinds of topics, ranging from personal matters to opinions about KDB,” Lee said after the ceremony. “I will make sure I am the only one who reads the emails in my inbox.”

At the end of the ceremony, Lee shook hands with every single employee that attended the ceremony.

“It is quite rare that a new chairman puts up a banner with his email address and shakes hands with every single employee in the hall,” said an employee at the inauguration.

A financial industry source said that Lee’s move may be part of his effort to emphasize his eagerness to get along with KDB’s union, which has criticized Lee’s appointment as being another “parachute appointment” made by the Park Geun-hye administration.

The KDB union issued a statement last Thursday that said “appointing Lee was compensation for the former vice chairman of Shinhan Investment Corporation, who urged the financial industry to endorse President Park during the 2012 presidential election.”

At the inauguration, Lee stressed that a restructuring of so-called zombie companies is his main priority.

“KDB will carry out preemptive restructuring on corporate borrowers that don’t show any will to voluntarily overhaul their business efforts in order to prevent them from repeating insolvency,” Lee said.

He also promised reformation of the state-run bank, emphasizing that KDB’s annual performance for 2015 is expected to end up in net loss and the bank’s financial soundness is expected be unhealthy.

“The public image of KDB so far has been far from reform,” Lee said. “We should innovate our own organization bearing all kinds of pain.”

Lee called for a need to expand the overseas banking market, saying that he hopes to make KDB play a leading role in enhancing Korea’s financial competitiveness.