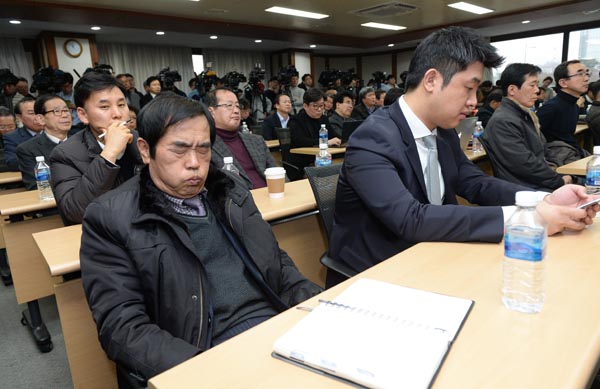 Representatives from South Korean companies with factories in the Kaesong Industrial Complex attend an emergency meeting on Friday to cope with the shutdown of the joint venture park. [NEWSIS]

In retaliation against the South’s shutdown of the last vestige of inter-Korean cooperation, the isolated North ejected the remaining South Korean nationals at the complex on Thursday and seized company assets left behind, declaring the factory park a “military control zone.”

South Korea said Wednesday that it was closing the Kaesong complex as a punitive measure for the North’s fourth nuclear test on Jan. 6 and a long-range missile test launch on Feb. 7, after Seoul concluded that the complex served as a source of revenue for the North to bolster its nuclear and missile programs.

“The North’s actions are extremely regrettable, and it should take full responsibility for everything that happens from now on,” Unification Minister Hong Yong-pyo said in a press conference, warning that the North should not damage South Korean assets.

Hong pledged that the measures announced by the government Friday would provide “swift and sufficient” support to the companies with factories in the North Korean border town of Kaesong and their contractors. He added that officials would hold one-on-one consultations in an effort to minimize the financial damage.

The government will provide emergency liquidity assistance to ailing businesses - up to 500 million won ($414,000) for each company - and extend the maturity of loans borrowed by those companies.

It also plans to provide 285 billion won in total compensation to small and midsize enterprises already covered by state-run insurance programs, according to Lee Suk-joon, the head of government policy coordination in the Prime Minister’s Office.

He also announced a package of grace periods for paying taxes, utilities and social insurance fees.

But despite the announcement, representatives from the companies whose property was seized lashed out at the government on Friday following an emergency meeting.

Considering that the amount of actual damage is likely to be greater than in 2013, when operations at the complex were suspended for 162 days amid heightened tensions following the North’s third nuclear test, backlash was expected.

Total losses in 2013 were reported to be over 1 trillion won; sources say this time, the combined damage is expected to stand at more than 2 trillion won. “Last time [in 2013], we brought a considerable amount of assets and property from the North, but it’s a totally different situation now,” said Jeong Gi-seob, president of the Corporate Association of the Kaesong Industrial Complex. “The amount of damage will really pile up, especially considering our lost business rights.”

Jeong and other representatives visited leaders of the ruling and opposition parties on Friday, asking them to form a committee to investigate and compensate for potential damage.

Jeong told lawmakers that he felt like he was having a “nightmare.”

Kim Moo-sung, chairman of the ruling Saenuri Party, insisted he would push for a special law if solving the problem proved to be limited by the existing system and legislation. The main opposition Minjoo Party of Korea said it would also consider a special law.

A representative of a clothing company said the amount of raw and subsidiary materials the company input nearly doubled recently compared to 2013. Other companies, the source added, also increased their input.

From January to November 2015, Korean businesses in the complex produced about 617.2 billion won worth of products and invested 561.3 billion won.

“It’s tragic,” Kang Seong-ho, who ran a shoe-making business in Kaesong, said Thursday night as he arrived back in the South. “It was painful to leave behind the finished products that were still left at the factory.

“The amount of lost inventory is likely to be worth billions of won.”

With the last remaining symbol of inter-Korean economic cooperation now under the control of the North Korean military, it is likely the regime will confiscate all South Korean assets there. When operations for the tourism program on Mount Kumgang were suspended in 2010, the North confiscated almost 500 billion won worth of South Korean assets.

One source familiar with the situation in North Korea said the country would move facilities to the northwestern border city of the Sinuiju International Economic Zone if the shutdown lasts for a significant period, adding that Pyongyang had considered doing so in 2013, when the complex was temporarily shuttered.

The 280 South Koreans who were evacuated from North Korea left behind finished products, materials and equipment. The evacuation process concluded at around 11 p.m. Thursday, according to the South’s Ministry of Unification.

Less than an hour later, the South cut off water and power supply to the complex.

South Korea’s conclusion that it could not stop the North from enhancing its weapons programs within its existing framework came amid calls from Seoul’s neighbors and Washington to shut down the Kaesong Industrial Complex, created after the first inter-Korean summit in June 2000.

The venture park served as a cash cow for Pyongyang, as wages and fees were sent directly to the North Korean government in U.S. dollars. One hundred and twenty-four small and midsize companies employed about 55,000 North Korean workers, who produced everything from clothes to electronic parts.

South Korea’s unification minister said Wednesday that about $120 million in cash had been sent to North Korea in 2015, and that a total of $560 million had been sent so far through Kaesong. He pointed out that the government and private companies also invested more than 1 trillion won in the complex so far.