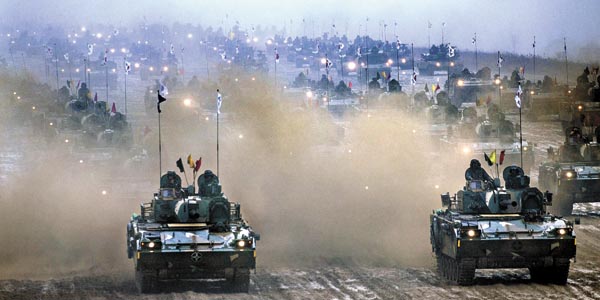 South Korea is bracing for the possible return of North Korean artillery to Kaesong, the Ministry of National Defense said Friday, following Pyongyang’s declaration that its military will control the border city.

“Our preparation is exhaustive for any situation,” said Moon Sang-gyun, a Defense Ministry spokesman. “If the North redeploys its troops, it has to decide first what it will do with the Kaesong Industrial Complex, so it won’t be easy. But we left the possibility open and are preparing for it.”

According to Moon, no out-of-the-ordinary military movements were detected in Kaesong.

“Although there is a concern about military threats, it is not too serious right now,” he said. “The South Korean military is maintaining its readiness in case of any change.”

Following North Korea’s fourth nuclear test in January and a long-range missile firing last Sunday, South Korea decided Wednesday to pull the plug on the inter-Korean Kaesong Industrial Complex. The North expelled all South Korean workers from the complex Thursday and declared its military will have jurisdiction over the industrial zone.

The North said it will totally block the military demarcation line near the Kaesong Industrial Complex from 10 a.m. Thursday, cutting off roads along the west coast in areas under the control of the North and South.

The North closed the industrial zone and declared it under military control.

After the North’s announcement, South Korea’s military beefed up its readiness on the western border.

Located about 39 kilometers (24 miles) northwest of Seoul, 30 kilometers north of Incheon and 10 kilometers southwest of the truce village of Panmunjom at the inter-Korean border, Kaesong has long been an important strategic location for the North Korean military.

The western border city is considered a key passageway for the North’s invasion of the South.

The North Korean military can assemble its troops and weapons in Kaesong and enter Seoul in the shortest period of time.

Before the groundbreaking ceremony for the industrial complex in 2003, Panmun County in Kaesong, where the factories are located now, was a North Korean military base. The 6th Division, the 64th Division and the 62nd artillery brigade of the 2nd Corps were stationed in the area.

The 62nd artillery brigade was armed with 170-millimeter self-propelled guns and 240-milimeter multiple rocket launchers. The long-range artillery have ranges of up to 65 kilometers and are major threats to the South’s capital region.

When the area was developed into an inter-Korean industrial zone, the troops were redeployed to areas 15 to 20 kilometers north of Kaesong.

During the early stage of development, the North’s military complained about Pyongyang’s decision to allow South Korean businessmen to cross the border and enter such a strategic stronghold, government officials said.

“There is a possibility that the North will move the multiple rocket launchers to Kaesong,” a Defense Ministry official said.

Four battalions under the 6th Division that used to be stationed at the site could return, sources said.

After the complex started operation, two of the four units were moved to the rear, while the rest patrolled areas outside the industrial zone.

Moon also said Friday that all communication lines between the two Koreas were severed. “The military operated two lines in the western and eastern regions, but the eastern line was cut in 2013 due to mountain fires in the region,” he said. “The two Koreas operated telephone and fax lines in the western region. After the North unilaterally shut down the lines yesterday, all communications are severed.”

Behind the North’s decision to give control of Kaesong to the military appears to be a hard-line general, Kim Yong-chol, who is now in charge of South Korea policy. After Kim Yang-gon died last December, the chief of North Korea’s general reconnaissance bureau, who masterminded the deadly provocations over the past years, including the 2010 sinking of the Cheonan warship, assumed the posts of secretary of the Workers’ Party and head of the United Front Department.

The North’s declaration Thursday of military control over Kaesong was issued by the Committee for the Peaceful Reunification of Korea, an organ under Kim’s United Front Department.

It is not the first time Kim has acted aggressively over the fate of the Kaesong Industrial Complex. On Nov. 8, 2008, Kim visited Kaesong as policy director of the National Defense Commission, accompanied by military investigators. He asked South Korean businessmen how long it would take them to evacuate after an apparent threat amid escalated tensions between the two Koreas over South Korean activists sending anti-North propaganda leaflets.

Following Kim’s inspection, the North issued an order on Dec. 1, 2008, to cut the number of South Koreans who can stay in Kaesong and reduce the window of time for inter-Korean border crossings.