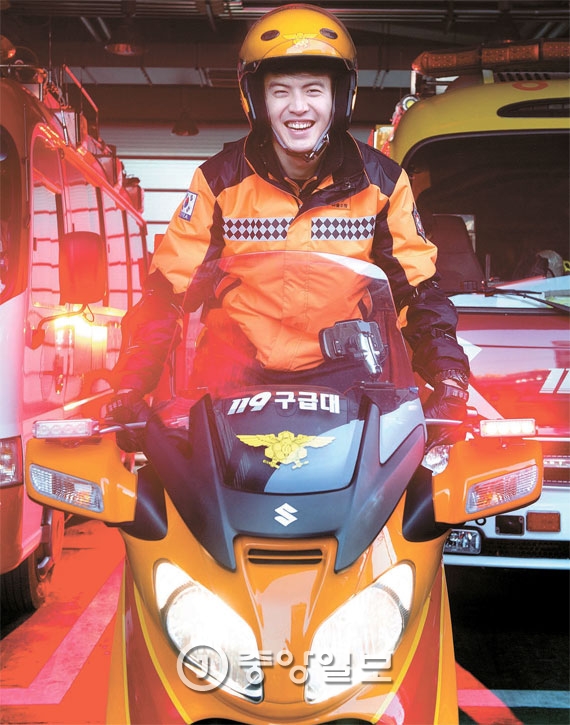 Firefighter Oh Young-hwan poses with his bike at the Seongbuk Fire Department in Seoul. [KIM HYUN-DONG]

Oh Young-hwan is a professional lifesaver.

Since last November, Oh has been assigned to a bike rescue team at the Seongbuk Fire Station in Seoul, which was established in 2010 to quickly respond to emergencies like heart attacks. Rescuers on bikes can penetrate the narrow alleys of Seoul that slow up ambulances. A total of 22 bikes are currently operating in rescue missions around Seoul.

When the JoongAng Ilbo met Oh, 29, on Feb. 2, an emergency kit including a defibrillator was installed on his bike. Time is of the essence in his profession, Oh says.

“When a heart stops breathing, only 5 percent come back and only about 3 percent of those patients survive,” says Oh. “There have been about 30 patients who had heart attacks in the past three months, and I couldn’t save any of them. I saved my first patient a few days ago.”

The patient was a sports fan. “We got a call when a national football team match between Korea and Japan was being played last month. A frantic girl told us that her father, who was in his 60s, was suddenly not breathing. The girl was applying cardiac compression to save her father when we arrived. After using the defibrillator, he came back.

“Korea lost to Japan 3-2 that night,” Oh says “but it was one of the happiest days for me.”

Oh became a firefighter six years ago at the age of 23.

“I saw firefighters helping people on TV news, and I thought becoming one would make my life more valuable,” Oh recalls. “My college professor strongly opposed my plan. I was majoring in nanotechnology, which was hot with conglomerates at the time. My professor tried to rip up my school dropout papers.”

Oh said he knew he had found his lifetime vocation when he grabbed the hand of a person who fell into a pond and saved him. The job also led to love and a life partner. He met his wife Kim Ja-in, a rock climber when he was working on a mountain rescue team.

Oh is also publishing a book about his experiences as a firefighter.

“On my social networking service, I started writing about how my co-workers and I don’t hesitate to risk our lives to save people. Many people liked it and encouraged me to share more stories,” Oh says.

“One day, a landlord called one of his tenants to collect the monthly rent and found the tenant lying on the floor of the bathroom. He called us. We found that he passed away hours before we arrived. I really felt sorry that a young man died like that without getting any help.”

Oh says he will donate 70 percent of the royalties from his book to families of firefighters who died or were injured during rescue operations.

“People die at my workplace,” says Oh. “My colleagues die. So I think it is right to give back some of the royalties generated from stories from those scenes.

“I want to give the rest to my parents, who still don’t watch TV news because they’re afraid of hearing tragic news about me.”

Oh says his next goal is to be a member of an aerospace rescue team. “I want to be one of the best in this field,” he says. “I want to stay on the rescue scene until I retire. That’s my dream.”