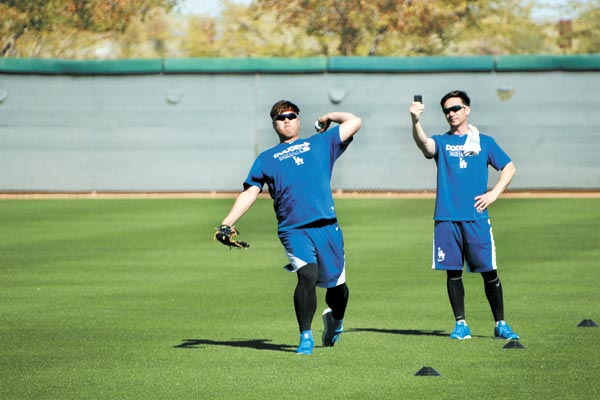 Ryu Hyun-jin throws a ball at the Dodgers camp in Glendale, Arizona. He hopes that the upcoming season will be new beginning for his career with the LA Dodgers. [JOONGANG PHOTO]

GLENDALE, Arizona - LA Dodgers pitcher Ryu Hyun-jin is desperately waiting for the start of the 2016 season after a shoulder operation forced him to step away from the game midway through last season.

Ryu suffered from pain in his shoulder for 3 years before he decided to undergo surgery in May 2015. Although a shoulder surgery is often feared by many pitchers since their career is at stake, Ryu is now full of confidence and looking forward to his return.

Ryu, 29, feels he is at the beginning of a new era in his career. “I have never looked back in last 10 years,” said Ryu. “Now I expect to play 10 more years and it all starts this year. Every ball I throw this season will be the first pitch into the next decade.”

He is currently on the “Dodgers’ rebound wish list,” according to the MLB.com. This is because the Dodgers pitching line-up is thin as Zack Greinske transferred to the Arizona Diamondbacks in Dec. 2015. The Dodgers are anxiously anticipating Ryu’s return in April for the opening game, although the team recommends that Ryu focus on his health first to make a full recovery.

Though the Dodgers Spring training is scheduled to begin on Feb. 20th, Ryu is among a handful of players at the Glendale camp who began training early.

As he tries to improve his fitness and overall physical condition before Spring training, Ryu is focusing on the minor details of his training including half-pitching sessions. He is reluctant to push himself too hard at the moment since he knows that an excessive work out would only slow down his recovery.

He took some time off on Feb. 11th after wrapping up his daily training to attend the friendly match between Lotte Giants of Korea and Nippon-Ham Fighters of Japan at Peoria Sports Complex in Arizona to watch Otani Shohei of the Fighters.

Otani is the Fighters ace pitcher whose debut at the MLB seems imminent as about 50 MLB scouts were also at the stadium to watch him. JoongAng Ilbo interviewed Ryu on Feb. 10th at the Dodgers camp in Glendale, Arizona.

Q. How is the training so far?

A. I am following the procedure recommended by the club. My current condition is not at the same level as the pre-season training last year before the surgery but I think I am managing it well. I try to be patient.

How is your pitching after the surgery?

I have not had any problems with the speed and control of my ball. They are the same as before at this moment. If I stick to the recovery plan, then I think I might be able to play in the pre-season game in March. I will follow the club’s instructions.

You have been unable to throw a ball for a long time. How do you feel about this?

A lot of people are worried that I would be dying to throw a ball and that the recovery process would be tedious. I didn’t think so. I took it easy and stayed calm. Since my pro debut in 2006, I have pushed myself without looking back. It was a good opportunity for me to take a step back for a breather. I wasn’t like this when I had a surgery on my elbow in high school. I was uneasy since I had less than a year before the pro draft. But this time, I started to think about my future career. I came to the conclusion that I have at least 10 more years in me. Since then, I started to consider the whole process of recovery as the moment where my career begins anew.

You are known for not being too restrictive with your diet, although you changed your diet during your rehabilitation. How did that work out?

I have cut down on meat and started to consume more fish. I consumed only white fish, salmon and eggs for several months after my surgery. It was difficult since I don’t like fish that much. But I lost about 7 kg (15 lbs). While I lost some fat, I gained more muscle. Frankly, I think my body’s condition is at its best since my debut at the Dodgers. I am eating some meat these days, though, since I need the strength to throw a ball.

The Dodgers recently signed Dave Roberts as the new manager. What are your thoughts on this?

Many teams in the MLB undergo dramatic changes in their management and player roster. I honestly do not know what to expect. Although this will be my fourth year in the MLB, I think I will have to adjust to the team all over again.

There are some new faces from Korea in the MLB this year. Do you have any advice for the incoming players?

Adaptability goes a long way in baseball, especially in foreign countries like the United States. Adjusting to the new setting will be an important element. They must take the initiative in approaching others even if the language is a problem. In terms of baseball, I think everyone is capable to compete in the MLB. Park Byung-ho who signed with the Minnesota Twins is an excellent batter and first baseman. Kim Hyun-soo of the Baltimore Orioles is also a great batter and outfielder. They all have what it takes to compete at the Big League. Their homework is to adapt to the unfamiliar atmosphere as quickly as possible.