Businesses are urged to delay bills at complex

Businesses are urged to delay bills at complex 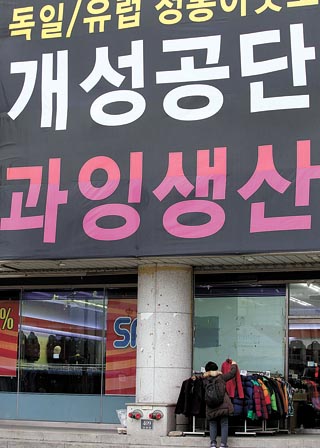 Products from the closed Kaesong Industrial Complex in North Korea are being offered at discounted prices at a store in Seoul on Sunday. [NEWSIS]

Yoo Il-ho, deputy prime minister for economy and finance minister on Sunday asked the business community to delay invoices on small and mid-size companies that were forced to leave their factories and other fixed assets in the Kaesong Industrial Complex.

“We need cooperation from the business community to minimize the impact of the shutdown of the Kaesong Industrial Complex on the economy,” Yoo said at a meeting with business leaders in Seoul. “We ask companies transacting with the Kaesong firms to cooperate on putting off delivery and payment dues, while making efforts to maintain their contracts.”

“The government plans to establish measures to help the firms relocate production,” the minister said. “The government will provide subsidies and loans for the companies to maintain their workforces.”

Yoo’s request is the latest move by the government to soothe the anger of the South Korean entrepreneurs who had been doing business in the park until the government’s unilateral decision to shut it down in response to North Korea’s missile firing on Feb. 7.

On Friday, the government announced it will provide emergency liquidity assistance to affected businesses - up to 500 million won ($414,000) for each company - and extend the maturity of loans borrowed by those companies. The Prime Minister’s Office also said it plans to provide 285 billion won in total compensation to those SMEs already covered by state-run insurance programs.

However, representatives from the companies lashed out at the government, calling the plan “insufficient”.

In response to the relocation proposal, the companies are worried about high labor costs compared to Kaesong.

The Ministry of Trade, Industry and Energy found that the average wage for North Korean employees in the Kaesong Industrial Complex is between $150 and $200 per month. In the South, the minimum wage for a similar factory worker is about 1.8 million won.

“Where can we continue production by paying employees 200,000 won a month?” asked one of factory owners in Kaesong at a consultation session hosted by the Small & Medium Business Administration last week.

“Most of the 124 companies are subordinate suppliers to larger companies,” said an official at the Industry Ministry. “They are most worried about rising production costs.”