Rihanna shows off her own designs

Rihanna shows off her own designs 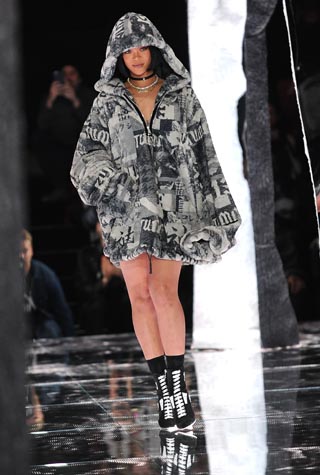 Rihanna greets the audience after Fenty Puma by Rihanna is shown during New York Fashion Week on Friday. [AP/NEWSIS]

NEW YORK - Rihanna is certainly used to stopping the show, whether as a performer or as a fashion figure whose daring choices can make headlines.

But at New York Fashion Week on Friday, she let her models make the splashy entrances. After all, she was the designer this time.

The singer presented her Fenty Puma by Rihanna collection, heavy on Japanese-inspired streetwear in almost exclusively black and white, with, she said, “a Gothic undertone.” As befitting a collection for Puma, it of course featured sneakers, many with high stacked platforms.

In an interview before the show, which was staged in a dark, mirrored, forest-like setting filled with stage smoke, Rihanna spoke about what motivates her to design.

“I think design is a part of being creative,” she told The Associated Press. “I enjoy creating and expressing the crazy things going on in my mind through something that people can see and that is tangible. That is the best part, being able to express yourself.

“Fashion to me was just one of those things that came naturally,” she said. “I enjoy discovering it - all the different styles, finishes, fabrics, silhouettes. It’s not easy, but it doesn’t feel like work.”

Rihanna, who’s been a frequent Fashion Week presence over the years at shows like Alexander Wang, said there had been “lots of great designers in the world that I’ve been inspired by.” But she declined to name one in particular she’d like to emulate, saying she didn’t want to reproduce someone else’s work.

At the show’s end, before a crowd that included upcoming Oscar host Chris Rock, supermodel Naomi Campbell, singers Ne-Yo and Pete Wentz, designer Jeremy Scott, and Vogue editor Anna Wintour, Rihanna came out to take a bow, in a gray-and-white patterned jacket with a huge hood.

Earlier, on the red carpet, she had worn a black top with velvet on the outside and a jersey fabric on the inside. “I wanted to keep it sporty,” she said.