Banks get to decide investments

Banks get to decide investments 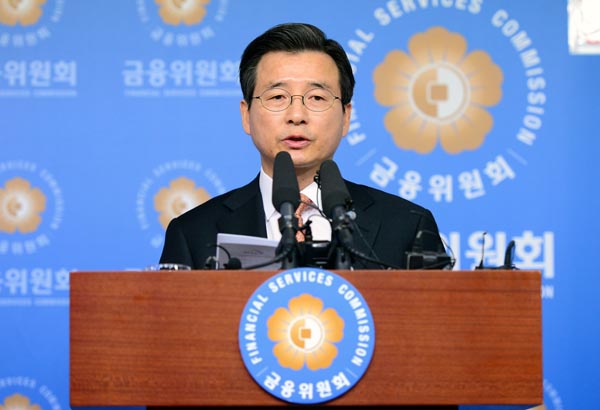 Commercial banks will be allowed to invest clients’ funds in financial assets based on their discretionary judgment starting next month, the Financial Services Commission announced on Sunday.

As part of its reform efforts to remove the barrier between the banking and securities sectors, the nation’s top financial regulator will lift the regulation that has prevented banks from making investment decisions on behalf of their clients with the introduction of the Individual Savings Account (ISA) system on March 14.

The ISA is an integrated system to manage a number of different financial accounts, from ordinary savings accounts to securities accounts, in one platform. To promote the new system, the government is offering tax exemptions of up to 2 million won ($1,719) on profits made from the ISA system.

Under the ISA system, subscribers will not need to make separate visits to securities brokerages or commercial banks. In addition, if the financial authority revises related law in the near term, banks will also be able to lure customers to sign up for ISA online. 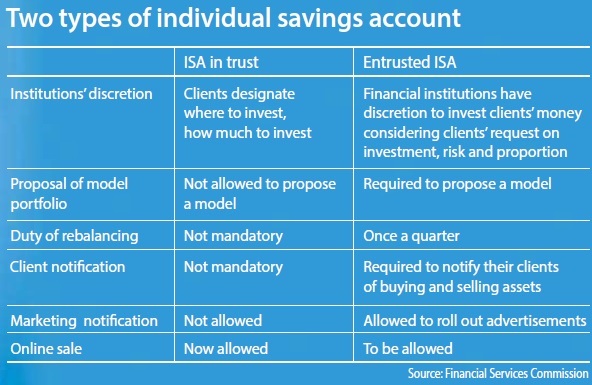 According to an initial plan by the authority, commercial banks were allowed to make investments only in trust, but the FSC allowed the banks to operate discretionary accounts with a goal of lifting the regulatory barrier between banks and securities firms and improving consumers’ convenience.

As a result, competition between the banking and securities sector will intensify to attract customers.

“The latest plan has removed the partition between the banking and securities sectors by approving banks to entrust investments,” said Kim Yong-beom, secretary general of the FSC. “It is part of efforts to boost competition and innovation among financial institutions and come up with better solutions for the people to accumulate their wealth.”

Representative of the country’s securities industry expressed concern about blurring the boundary between the banking and securities sectors.

Hwang Young-key, chairman of Korea Financial Investment Association (Kofia), said at a press conference on Sunday, “The banks are given limited approval to entrusted ISA only,” which highlighted that the banks are still banned from other entrusted investment businesses other than the ISA system.

“The FSC, the Korea Federation of Banks and Kofia have already reached an agreement to end the discussion on banks’ entry into the entrusted investment business,” Hwang said. “And I am confident the agreement will be kept.”

As consumers will be able to subscribe to the entrusted ISA at any bank branch and securities brokerages, securities firms, with 1,217 branches nationwide, will be less competitive than banks, which have a total of 7,305 branches.

“But real competition will be made in management capability,” Hwang said. “Securities firms will have a competitive edge in establishing profitable portfolios over banks.”