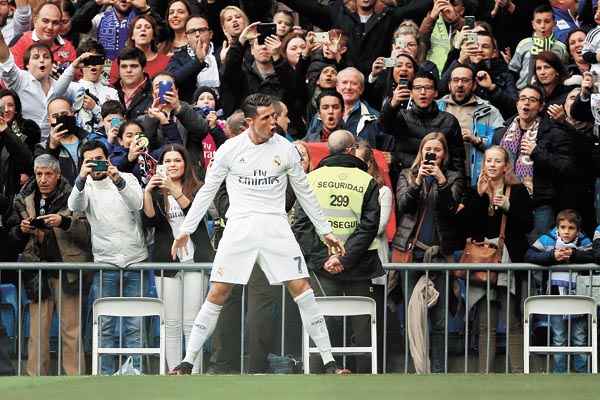 BARCELONA, Spain - Cristiano Ronaldo scored two goals to lead Real Madrid to a 4-2 win over Athletic Bilbao on Saturday, provisionally lifting it into second place in the Spanish league.

Ronaldo opened the scoring in the third minute before Javier Eraso quickly leveled for the Basques in a back-and-forth first half at the Santiago Bernabeu that finished with James Rodriguez and Toni Kroos giving Madrid a 3-1 lead at halftime.

Madrid defender Raphael Varane, whose error led to Eraso’s goal, was sent off in the 83rd minute after earning identical bookings for twice thrusting his forearm into Aritz Aduriz’s head while contesting a high ball.

Despite being a man down, Ronaldo found the net again in the 87th minute to move past Barcelona’s Luis Suarez as the competition’s leading scorer with 21 goals this season.

Madrid’s fourth win in as many home matches under coach Zinedine Zidane - by a combined score of 20-3 - lifted it two points ahead of Atletico Madrid before they visit Getafe on Sunday.

Leaders Barcelona are one point ahead of Madrid with two matches to play: against Celta on Sunday and at Sporting Gijon on Wednesday.

Zidane will make his European coaching debut on Wednesday when Madrid visits Roma in the Champions League’s round of 16.

Ronaldo’s goals were his 31st and 32nd in 30 games across all competitions this campaign, a season in which he has been criticized by some for failing to score against important rivals.

“About Cristiano, what can I say?’’ Zidane said before employing an expletive in Spanish to describe how good he considers the forward’s form.

“We are ready for the match against Roma. We are in shape, playing well, and very pleased with how we played today against a very good rival. We are prepared for Wednesday.’’

Also on Saturday, Villarreal strengthened its hold on fourth place and the last Champions League spot with a 1-0 win at home over Malaga thanks to striker Roberto Soldado’s 18th-minute goal.

Ronaldo gave Madrid a brilliant start when he received a pass from Karim Benzema, used a deft dribble to wrong-foot Xabier Etxeita and fired a right-footed strike just under the crossbar.

But Bilbao was undaunted and quickly leveled in the 10th minute when Eraso pounced on Varane’s poor backpass that goalkeeper Keylor Navas did well to stop from becoming an own goal but left for Eraso to finish off.

Aduriz went close twice to putting the visitors ahead with a header saved by Navas before the striker hit the bar.

Rodriguez turned the flow back in Madrid’s favor with an excellent strike with his left foot from outside the area that curled around outstretched goalkeeper Gorka Iraizoz in the 37th minute.

Kroos put Madrid in full control heading into the break when he took a pass from Ronaldo in the area and sent a shot that deflected off a defender past Iraizoz in first-half injury time.

“We leave with the feeling that we had a good first half. Maybe we missed a great opportunity today,’’ said Bilbao manager Ernesto Valverde, impressed by Madrid’s “extraordinary firepower.’’

Ronaldo hit the upright before finally getting his second goal from a pass by substitute Lucas Vazquez.