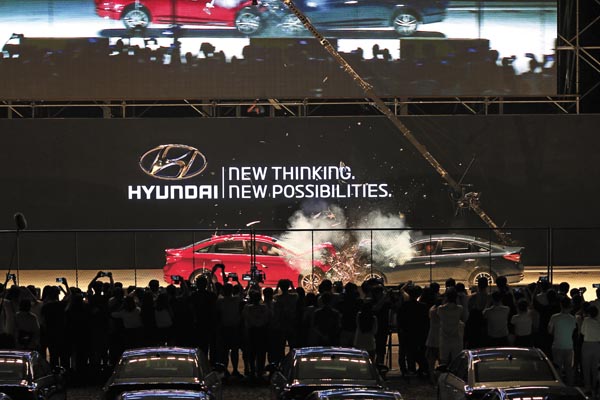 Hyundai Motor staged a head-on collision test with its best-selling Sonata sedan in front of a crowd at Songdo International Business District, Incheon, in August last year to prove that it offers the same quality of cars in domestic and export markets. [HYUNDAI MOTOR]

The event could have been described as a crashing success in a bid to capture the hearts and minds of potential customers in Korea.

Hyundai Motor wanted to prove that the quality of its cars, whether bought in the domestic market or for overseas sales, was the same.

So in August last year, to mark the 30th year since the Sonata was launched, the company staged a head-on collision test at Songdo International Business District in Incheon with two identical Sonata sedans, one produced for local sales and one for overseas sales, in front of about 300 audience members and journalists.

The two Sonatas ran straight into each other at about 58 kilometers per hour (36 miles per hour), and the audience whooped after the grinding collision to find the cars were equally damaged.

It was a challenging event for Hyundai, as it stood to damage its reputation if the export Sonata proved to be stronger than the domestic car, proving rumors widely spread among local consumers. 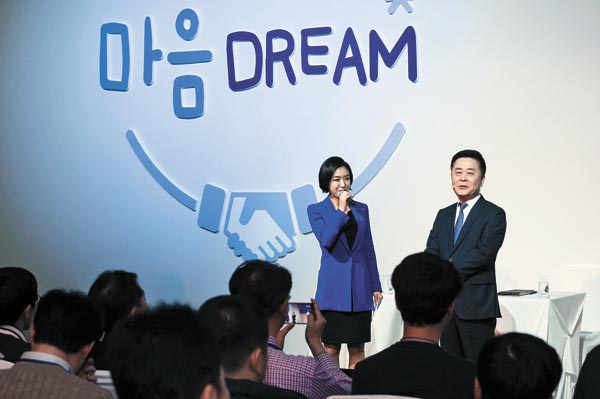 Hyundai said they didn’t choose the cars. They let a well-known car blogger Lee Dae-hwan choose a Sonata at Hyundai’s Asan plant in South Chungcheong and let him sign the windshield with a permanent pen to identify the vehicle. To get a Sonata being sold in the export market, Prof. Kim Pil-soo from Daelim University’s automotive engineering department went to Los Angeles and picked a red Sonata Turbo on display at a dealer shop in California. The car was manufactured at the company’s Alabama plant. Kim also wrote his name on the windshield with a white permanent pen.

Professor Kim said the comparison test should be based on three features: damage on the driver’s seat side when the A-pillar, the structure connecting the front windshield and front doors, was pressed; whether the air bags operated properly; and whether the car doors opened well for an escape after the collision. Both Sonatas passed on all three checkpoints. 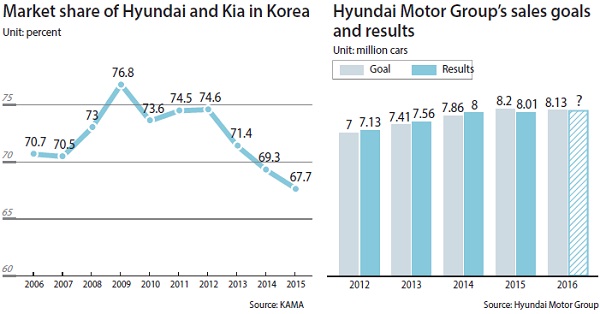 “We knew that this was risky, but we decided to do this in order to show our local consumers that we are selling the same quality of cars in Korea and overseas,” said Kwak Jin, domestic sales chief of Hyundai. “There has been strong controversy that we are not trying hard enough to communicate with local consumers, and we sincerely admit that criticism. We know that this two-minute test won’t resolve every criticism customers have about us, but we promise that we will keep working on it.”

Cho Soo-hong, chief analyst at NH Investment & Securities, said, “In terms of sales, Hyundai’s growth has been slowing down, meaning that its ‘quantitative growth’ already had shown signs of being stagnant over the past few years.

“The qualitative growth plan basically includes plans for improving profit structures, part of which is launching the Genesis brand. Under these circumstances, it is necessary to rebuild a friendly relationship with local consumers, since they are key to overcoming recent economic hardships being impacted by the rise of interest rates in the United States and unstable foreign currency.” 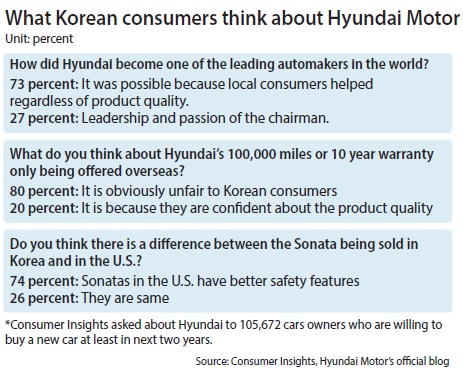 Chung said the sales goal of the two automakers for this year is 8.13 million units, about 70,000 below last year’s target that the company failed to accomplish. It is the first time the group has set its sales goal lower than the previous year. During the address to employees, Chung repeated “cars should not break down” more than a dozen times, emphasizing that the company’s leadership should try its best to improve overall product quality by making appropriate investments in research and development and after-sales service. 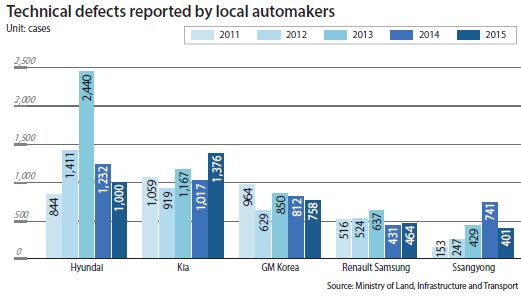 Industry insiders say the qualitative growth plans came out due to tough global market conditions. Taking a look at a world map, it looks like the two auto giants are facing another tough year. According to market forecasts compiled by multiple agencies, including the Korea Automotive Research Institute, the U.S. market grew up by 5.7 percent in terms of sales last year from 2014, but the sales figure will drop to the 1.6 percent level this year.

Car sales in the European market grew by 6.5 percent last year from a year ago, but that figure is also predicted to drop to the 3.1 percent level this year. The Chinese auto market, which became the world’s biggest with an average growth rate of 33.6 percent in the last 10 years, was predicted to see the end of such growth and increase by only about 3 percent this year to 88.5 million units.

“Hyundai’s sales will increase about 2.1 percent this year [which is a little lower than the market average],” said Cho from NH Investment & Securities.

Reflecting such hardships, Hyundai’s earnings were worse than during the 2008 global financial crisis. Hyundai’s revenue last year rose by 3 percent from a year ago to 91.9587 trillion won ($77 billion), but operating profit dropped by 15.8 percent during the same period to 6.3579 trillion won, while the net profit dropped by 14.9 percent year on year to 6.5092 trillion won. Operating profit has declined for three consecutive years since 2012, when it made 8.4406 trillion won, and the operating profit rate dropped from 2012’s 9.9 percent to 7.16 percent last year, meaning its overall profit is consistently shrinking.

“One of the biggest reasons was the unstable foreign currency, and that impacted sales overseas” said Lee Won-hee, Hyundai’s finance chief. “The dollar-won rate dropped in 2014, and the crash of the [Russian] ruble and [Brazilian] real also impacted our sales in emerging markets.”

Surprisingly, Hyundai and Kia might be the only auto brands in the world not loved by local consumers, particularly among young people aged 20 to 40, regardless of how many cars each automaker sold each year. Every time either Hyundai or Kia rolls out a new car, hundreds of opinions mock the new model on the Internet.

Regardless of whether it is true or not, such distrust spreads, particularly among the younger generation who are smarter about cars and have easier access to information thanks to the Internet. In fact, the two automakers have gone through some controversial product quality issues and services that discriminate local consumers from customers overseas. Hyundai’s popular Santa Fe SUV was criticized for a water leak problem on the trunk side in 2013, and Kia also became the subject of criticism with its new Sorento SUV for an oil leak problem last year.

Although Hyundai won a J.D. Power award in the United States and received the highest score in safety collision tests, anti-Hyundai Koreans disparaged the achievements, saying, “Okay, how much have they paid the organizing committee to win this time?”

Such thoughts are reflected in a survey of 105,672 people conducted with Consumer Insight in January. In the survey, 78 percent of respondents said they think Hyundai uses more expensive parts for export cars, while only 22 percent said they think it is possible that the automaker might use different parts due to regulations in each market.

In the survey, 73 percent said Hyundai was able to become one of the world’s leading automakers because the government and local consumers greatly helped its competitiveness.

“It means local consumers feel like they were betrayed every single time they saw the automaker offering poor-quality cars and making no clear explanations about related issues when it offers better prices on products overseas,” an analyst said on the condition of anonymity.

The automaker has not provided a clear answer for why it offers different conditions to local customers, but industry insiders say that Hyundai and Kia didn’t care much about such reactions as they were confident about securing the local market. However, the automaker may have learned a lesson after its local market share fell below the 70 percent level for two consecutive years for the first time.

In 2014, the domestic market share by Hyundai and Kia was 69.5 percent, but the figure dropped to 67.7 percent last year, mainly due to the increasing popularity of imported cars whose market share in Korea rose from 13.9 percent to 15.5 percent from 2014 to last year. This was mainly due to consistently falling car prices under the free trade agreement and industry-leading product quality being offered by the top three German brands BMW, Mercedes-Benz and Volkswagen. Korea was the only country that showed an increasing sales trend among the big three Asian nations Korea, China and Japan.

Hyundai is attempting to address the problem. In December last year, it held a discussion event with 100 members of the Internet car community “Bobae Dream,” one of the biggest anti-Hyundai websites. The automaker’s executives, including Kwak, the domestic sales chief, and domestic marketing director Kim Sang-dae had to deal with tough questions on cheaper car prices overseas and the reason for the Genesis brand.

As one of the questioners pointed out, the qualitative growth plan includes a plan for improving the profit structure, and the luxe brand Genesis that was launched in December will be a significant part of profit growth. Considering Hyundai has relied heavily on small cars and has been poor in selling large and expensive cars in the export market, the success of the Genesis brand in Korea is more important than in overseas markets for now.

“In the long run, Hyundai’s ultimate goal is to successfully establish the Genesis brand with cars that can compete with other luxe cars made by Benz and BMW in markets like Europe, where the automaker never succeeded in the segment,” said Professor Kim of Daelim University. “But it can’t be done without success in the local market since it will lose propulsion to extend the project worldwide. That’s why Hyundai has started to care about Korean consumers more.”