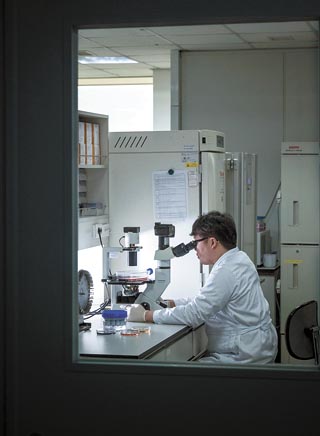 Jimmy Carter, former president of the United States, announced in December that he was now “cancer-free.”

Just three months earlier, the 91-year-old Carter had said his melanoma had spread to his liver and brain, and that it wasn’t clear whether he would survive.

Carter’s seemingly miraculous recovery was made possible by a new drug, Keytruda, which fights cancer by boosting the body’s immune system.

New developments in biotechnology, such as Keytruda, are making recoveries like Carter’s more and more common.

The biotech industry is divided into various sectors, including pharmaceuticals, food, health care and environment, with pharmaceuticals and food accounting for 60 percent of the total. Industry experts predict the pharmaceutical sector will grow most rapidly.

Korea’s bio-health industry has both strengths and weaknesses. Korea’s stem cell and genetically modified organism technology is about 80 percent of that possessed by the United States. But the nation’s technology for bioanalysis lags behind, currently at about 69 percent.

There are a total 975 biotech companies in Korea as of 2014, but 60 percent are start-ups with limited financial resources. The local biotech market is valued at 7.6 trillion won ($6.3 billion), which is low compared to other developed countries.

The size of the global pharmaceutical market was about $781 billion last year, of which 23 percent, or $179 billion, came from biologic drugs, which are made from living organisms rather than chemical synthesis.

The biologic drug sector is growing faster than that of chemically synthesized drugs, and its market size is expected to reach $278 billion by 2020. 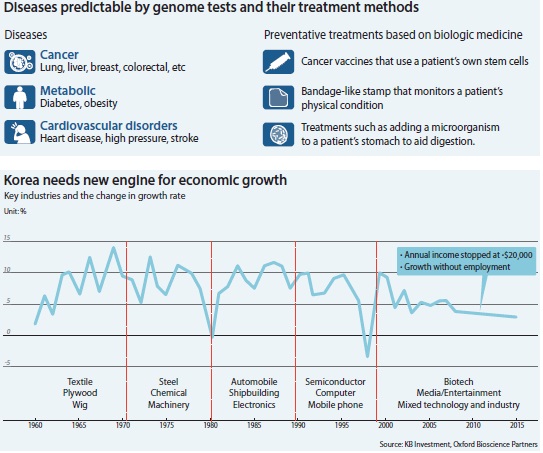 “Biologic drugs work better than chemically synthesized drugs while also having fewer side effects,” said Kim Jang-sung, a director at the Korea Research Institute of Bioscience and Biotechnology (Kribb). “However, their molecular structures are very complicated, which makes them difficult to produce.”

There is a sign hanging in front of an elevator at Hanmi Pharmaceutical’s research center at Hwaseong, Gyeonggi, that reads: “10 years of research can be leaked in a second.”

Kwon Se-chang, a research director at the center, explained that the sign is to show how difficult it is to develop new biotech products.

The company’s diabetes treatments, which reached a license agreement with French drug maker Sanofi last year and are valued at up to 5 trillion won, and diabetes and obesity treatments called “HM12525A” were all born in this plant.

“We are seeing the results of spending 900 billion won to develop new products over the past 10 years,” Kwon said.

Advanced countries such as the United States, Switzerland and Japan, as well as emerging countries like China and India, are spending astronomical amounts of money in the biotechnology industry. This phenomenon is largely due to the industry’s operating profit-to-sales ratio often reaching near 20 percent.

Novartis’ market capitalization is around 250 trillion won, which is more than Samsung Electronics and Hyundai Motor combined.

Pharmaceutical companies around the world are constantly upping their spending because they believe the industry will become ever hotter as more and more of the world’s population becomes senior citizens.

The value of the global biotech industry market will reach $2.61 trillion in 2024, according to Datamonitor, a U.K.-based market analysis firm. The sum of the semiconductor, car and chemical industries, which are Korea’s top three export sectors, will only be around $2.59 trillion that same year.

“People older than 65 spend three times more than those in their 40s on medical expenses,” said Kwon Young-keun, a professor of biochemistry at Yonsei University. “However, our society is now aging faster than ever, and one out of three people around the world will suffer from certain diseases.

“We shouldn’t be left behind in the bio-health industry, which will improve both the health of people and the economy.”

Korea is doing very well in the biosimilars sector, which refers to making copies of existing drugs, often offering them at cheaper prices.

Local pharmaceutical manufacturer Celltrion’s biosimilar drug Remsima was approved to be sold in Europe in 2013, and Samsung Bioepis’ arthritis drug Enbrel has also recently been accepted.

Samsung Bioepis is expected to become the No. 1 biosimilar manufacturer in the world by 2018. Samsung plans to get aggressively involved in making both biosimilars and new biologic treatments.

There is constant demand for innovation in the biotech industry. There are at least 5,000 diseases known to mankind, but only 500 of them currently have treatments available.

“High-quality biosimilar treatments can be alternatives to widely used drugs once their patents expire,” said a representative of the Korea Biotechnology Industry Organization.

Another representative noted that 27 kinds of genetic medicines are currently going through clinical trials in Korea.

“Treatments for diabetic neuropathy, ischemic disease and degenerative arthritis are about to be commercialized,” the representative said.

Personal genomics, which focuses on the sequencing and analysis of an individual’s genome, is also becoming very important in the future of health care. The price for a genome sequencing test was around 300 million won five or six years ago. These days, however, the test only costs about 1 million won and takes only a day to get the results thanks to improved technology.

It is possible to identify or predict the likelihood of an individual having a certain disease later on in his or her life by having personal genomics information.

While drugs treat someone who already has a disease, personal genomics can work more preemptively, meaning that everyone stands to benefit from advances in genomics research.

“The IT industry grew rapidly starting from the late 1990s, when the price of a computer dropped to the 1 million won level, and I believe the biotech industry will follow the same pattern since the price of a genome sequencing test is now around 1 million won,” said Yeom Young-il, an assistant director at Kribb.

Information and communications technology can be a game changer for the health care industry as well. Robotic surgery, computer software that can instantly diagnose diseases and wearable health care technology are now being produced after going through years of research into various characteristics of humankind.

Medical devices usually have a development period of between five and 10 years. However, it is cheaper and faster to produce medical devices than make biologic drugs.

“Korea can be very successful in the medical devices sector backed by the country’s strong information technology,” said Kim Jang-sung of Kribb.