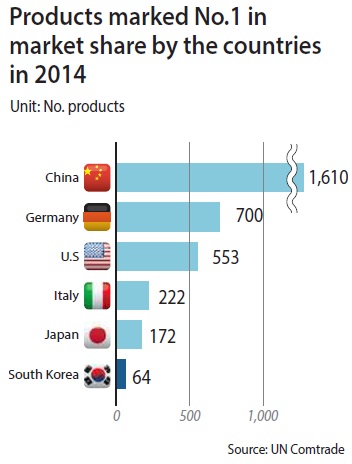 Korea is producing fewer industry-leading products while China’s share of the world marketplace is growing significantly.

According to a report by the Korea International Trade Association (KITA) on Sunday, a total of 64 Korean products were recognized as No. 1 in terms of worldwide market share in 2014. This places Korea in 13th position, down one place from the previous year when it had 65 of the most popular products.

Of the 64 products, 22 were made in the chemical sector, followed by steel (11), and non-electronic devices (7). A total of 17 new products were among the No. 1 products in terms of market share, while 18 products lost their “top selling” status to other countries. Forty seven products, including memory chips, secured their favored position from the previous year.

Comparing the numbers to 10 years ago, the number of no.1 products produced in Korea only increased by five, or from 59 to 64. In 2009, the figure slightly increased to 74, but it dropped to 61 in 2011 and it has maintained a similar lever since then.

While Korea hasn’t improved much in a decade, the number of most popular products made by China has increased considerably. Since surpassing the United States in 2004 and Germany in 2005 to be ranked at no.1 in the world for the first time in its history, China has held first position worldwide in selling the most industry-leading products.

China made a total of 932 products that were recognized as the most popular in the world in 2005 and the figure increased to 1,610 in 2014, meaning China’s total increased by 678 while Korea was able to make only five more top selling products during the same period.

Part of Korea’s problem is that it is competing directly with China in many industries. Korea previously held the top selling status in the steel and chemical sectors, however China now makes at least 10 times more industry-leading products in each category.

Of the 64 products made by Korea recognized as most popular, China was the runner-up in 17 products. The report added that the market share gap was lower than 10 percent between Korea and China for nine products among the 64 Korea still leads.

“The report showed that Korea and China are competing in many of the same businesses including medical device parts, car tubes and oil immersed type transformers,” said Kang Nae-young, researcher of the Institute for International Trade.

Kim Do-hoon, head of the Korea Institute for Industrial Economics & Trade, pointed out that Korea has been securing the No.1 position in some products for a long time while failing to invent a new trend. “One good thing is that Korea is still ahead of China in Internet of Things (IoT) and big data,” said Kim. “The government needs to ease regulations so that companies can play in a better environment.”