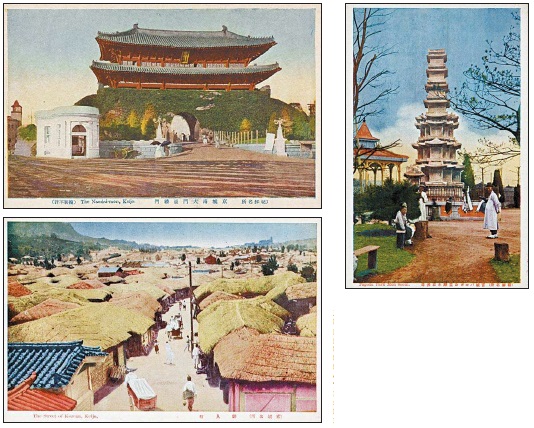 The New York Public Library disclosed hundreds of thousands of digital images in its archives to the public for free, including images of Korea during Japanese occupation. The images of Seoul were presumably used on postcards in Japan and Korea between 1915 and 1935. One thing to note is that on the postcards, Seoul is referred to as “Keizo,” which is a direct translation of the Japanese pronunciation of what it called Seoul back then into English.

These are some images downloaded from the New York Public Library’s website of old Seoul, including National Treasure No. 1 Sungnyemun Gate, also known as Namdaemun, top left, a street lined with thatched roof houses, left, and the pagoda in Tapgol Park in Jongno District, central Seoul, above. [NEW YORK PUBLIC LIBRARY]