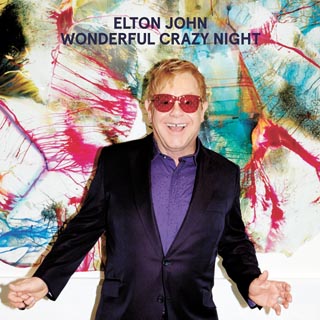 Elton John puts some pep in his pop on “Wonderful Crazy Night,’’ a more upbeat, natural-sounding album than recent efforts.

Driven by distinctive piano riffs and benefiting from the energy provided by the return of longtime drummer Nigel Olsson and guitarist Davey Johnstone, the 10 tracks, including lead single “Looking Up,’’ shine without gimmicks.

Lyricist Bernie Taupin and percussionist Ray Cooper - tambourine on five tracks - also lend their talents to John’s 33rd studio album, his third in a row produced by T Bone Burnett and the most streamlined of the trio.

The lyrics and melodies are well matched, and while John and Taupin have collaborated on some autobiographical albums and songs, they don’t seem to reveal much this time around.

“I’ve Got 2 Wings’’ tells the story of Utah Smith, a little-known Louisiana preacher whose efforts to spread the Good Word were aided by an electric guitar and a pair of colossal wings. In other tunes, Taupin’s images are more worldly but no less fervent - like the title track’s “ice cubes on the back of your neck,’’ or “you’re an open chord I’m gonna play all day.’’

Several songs like “A Good Heart’’ or “Blue Wonderful’’ could fit on John’s albums from decades ago, boosted now by a freshness in his voice he didn’t always have back then. “Wonderful Crazy Night’’ may not be as colorful as its cover, but it’s a lively, classy effort.