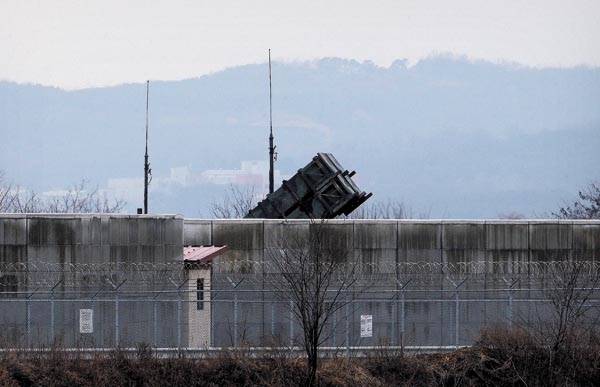 A U.S. Patriot missile at the Osan U.S. Air Base in Pyeongtaek, Gyeonggi, on Saturday. Washington said it temporarily deployed an additional Patriot missile battery in South Korea in response to the North’s nuclear test and a long-range rocket launch, ahead of talks next week to set up an even more sophisticated U.S. missile defense system. [AP/NEWSIS]

The United States has temporarily deployed an additional Patriot missile battery in South Korea to counter North Korea’s provocations after the regime’s fourth nuclear test and a long-range rocket launch.

The increased weaponry comes as North Korea continues to develop its mobile KN-08 intercontinental ballistic missiles that have the capability to reach mainland United States, one of the greatest concerns for Washington.

The United States Forces Korea (USFK) revealed on Saturday that the surface-to-air missile battery which was stationed at Fort Bliss in Texas had been deployed at the Osan Air Base in Gyeonggi on a rotational basis last week.

The USFK has not confirmed how long the battery will remain in South Korea or the timing of the rotation.

In a rare move, video footage was released of the arrival and transport of the Patriot Advanced Capability-3 (Pac-3) missile system at the Osan base on Feb. 8.

“North Korea’s continued development of ballistic missiles against the expressed will of the international community requires the Alliance to maintain effective and ready ballistic missile defenses,” said Lt. Gen. Thomas Vandal, the commanding general of the Eighth Army of the U.S. Forces Korea, in a statement Saturday.

Vandal added that the deployment was intended to ensure that Seoul and Washington are “always ready to defend against an attack from North Korea.”

According to a South Korean military official on Sunday, the Patriot missiles from the D Battery of the 1-43 Air Defense Artillery unit stationed at Fort Bliss in Texas have joined up with two existing batteries in Osan Air Base of the 35th Air Defense Artillery Brigade to carry out anti-missile defensive drills.

They are able to intercept North Korea’s short-range KN-01 and KN-02 missiles, along with longer range Scud and Rodong missiles.

The introduction of the PAC-3 system comes as Seoul and Washington declared they will officially begin discussions on the deployment of the advanced U.S.-led antiballistic missile Terminal High Altitude Area Defense (Thaad) system in South Korea.

U.S. Director of National Intelligence James Clapper warned last week that North Korea has taken steps toward its KN-08 road-mobile intercontinental ballistic missile system and that Pyongyang was committed to developing a long-range, nuclear-armed missile that is capable of posing a “direct threat” to the United States.

“We assess that North Korea has already taken initial steps toward fielding this system, although the system has not been flight-tested,” said Clapper in a report to the Senate Armed Services Committee last Tuesday.