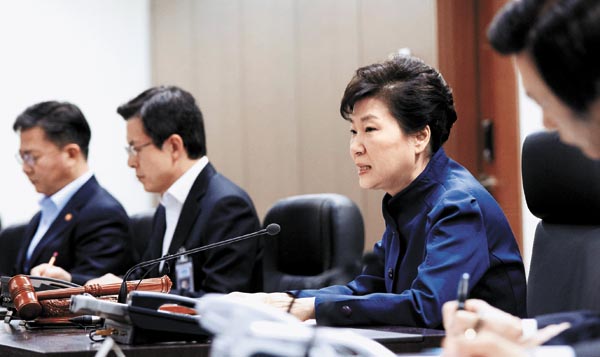 President Park Geun-hye presides over an emergency meeting of the National Security Council on Feb. 7 after North Korea launched a long-range ballistic missile that day. [NEWSIS]

President Park Geun-hye’s decision to sever the last remaining economic link with North Korea came ahead of an April general election, prompting speculation that inter-Korean relations will become an important issue in the polls.

Following the North’s fourth nuclear test in January and its firing of a long-range missile on Sunday, Park ordered South Korean businessmen operating factories at the Kaesong Industrial Complex to pull out. It was the first time factories in the inter-Korean industrial park stopped operations on Seoul’s command.

South Korea’s elections have frequently been affected by North Korea. The infamous midair bombing of Korean Air Flight 858 by two North Korean agents took place on Nov. 29, 1987. One of the two bombers was apprehended by South Korea on Dec. 15, 1987. Roh Tae-woo, a conservative candidate, won the presidential election the following day.

Analysts say, however, that the power of the so-called Northern Wind to unite conservative voters has steadily weakened over the past decade.

Park had an amicable relationship with North Korea during the early days of her political career. In 2002, Park left the Grand National Party, the predecessor of the Saenuri Party, to create her own political party. At the time, she visited North Korea as an envoy of then-South Korean President Kim Dae-jung and had a talk with North Korean leader Kim Jong-il. The trip did a lot to elevate the political profile of the second-term lawmaker.

Her relationship with the North, however, turned sour after she returned to the conservative ruling party to become its chairwoman in 2004 and then a presidential frontrunner.

When North Korea conducted its first nuclear test in October 2006, Park’s visit to Pyongyang became a liability, and her opponents used it to attack her. During the 2007 presidential primary, a photo of Kim Jong-il standing on a chair and looking down on Park was circulated, hurting her campaign. An investigation later revealed that the photo was fabricated, but it still cut into her ratings. She ended up losing the presidential primary to Lee Myung-bak.

The difficult relationship with the North continued. Only two weeks before Park’s presidential inauguration in 2013, Pyongyang conducted its third nuclear test. Two months after she took office, the North withdrew its workers from the Kaesong Industrial Complex to protest annual Korea-U.S. military exercises.

Since then, Park has maintained a hard-line approach toward the North. Even after the North withdrew its workers from Kaesong in April 2013, Park did not make any concessions.

“She values trust highly in all relationships, and she is also treating the North Korea issue from that perspective,” said Nam Sung-wook, a professor of North Korea studies at Korea University. “Because Park is treating the North’s provocation as a betrayal of trust, she is taking strong responses.”

So far, her approach has appealed to the Korean public. When Park did not make concessions in 2013 over the suspension of the Kaesong Industrial Complex, her ratings benefited. A Gallup Korea poll conducted on July 29, 2013, showed that 71 percent of the South Korean public supported her decision.

When the North planted land mines at the border last August that maimed two South Korean soldiers, Park responded with the resumption of propaganda broadcasts for the first time in 11 years. Her approval rating, which had dipped to 30 percent due to the government’s poor handling of the Middle East respiratory syndrome outbreak, regained to a 40 percent level.

How the North’s nuclear and missile tests, and Park’s subsequent decision to shut down the Kaesong complex, will influence the April 13 general election remains to be seen.

“She concentrated her diplomacy on China,” said Lee Jun-han, a political science professor at Incheon National University. “But the government won nothing in terms of inter-Korean relations. In this situation, the decision to shut down the Kaesong complex will help boost her approval rating.”

A North Korea expert said the Kaesong complex is the essence of the so-called Sunshine Policy of engaging North Korea, and suspending it reminds the public of the contrast between past liberal leaders and the current conservative administration.

The main opposition Minjoo Party of Korea criticized Park’s decision to pull the plug on the Kaesong project.

“It is suspicious that the government is shutting down the Kaesong Industrial Complex as part of an election strategy,” Rep. Lee Jong-kul, floor leader of the Minjoo Party, said Thursday. “Our party must take into account Park’s election strategy as a key factor.”

The minority opposition People’s Party also expressed concerns that Park may be using the Kaesong project for domestic political purposes.

“She applied her political philosophy of punishing betrayals to the fate of Kaesong,” said Kim Keun-sik, a North Korea specialist and a member of the People’s Party. “This is a nail in the coffin for inter-Korean relations.”

He said Park and the conservative ruling Saenuri Party will face serious repercussions if they try to use a security crisis for political gains in the upcoming election.

Some political analysts said the North’s nuclear and missile tests, and Park’s decision to shut down Kaesong, may distract the public from other issues, including a weak economy.

“Park may be portrayed as a strong, determined leader, and her popularity may go up,” said Park Won-ho, a political science professor at Seoul National University. “The risk is that the government’s failures with North Korea and foreign policy can be highlighted if the security crisis continues for weeks.”

“The latest developments are issues that can unite conservatives, but they can also fuel insecurities that the government has failed in its North Korea policy,” said political science Prof. Kang Won-taek of Seoul National University.

“Park supporters will unite, but the liberals supporting the Sunshine Policy will also unite,” said Im Hyug-baeg, a professor in the department of political science and diplomacy at Korea University. “So it is not necessarily advantageous for the conservatives.

“The upcoming election is an important event that should decide the direction of the Korean economy, including economic democracy,” he continued. “But the inter-Korean crisis, which is destined to split voters ideologically, is dominating the races. In the long term, this is not healthy for Korean society.”