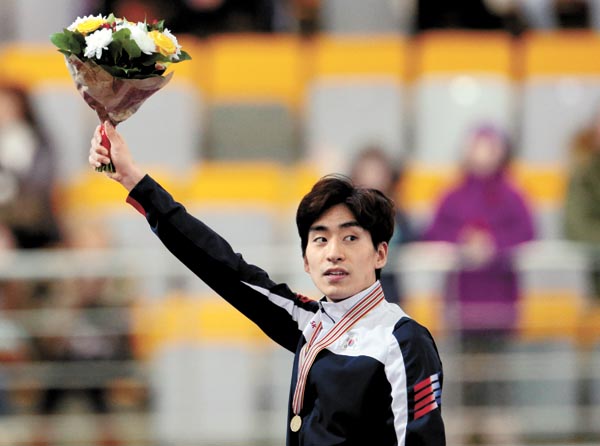 For the national speed skating team, the 2016 International Skating Union (ISU) World Single Distance Speed Skating Championships in Kolomna, Russia, was worth more than just a couple of spots on the podium. It also raised hopes for broader success in the 2018 Pyeongchang Winter Olympics, as the team brought in two medals from an event other than the 500 meter.

On top of the gold that Lee Sang-hwa earned in women’s 500 meter on Feb. 13, Lee Seung-hoon and Kim Bo-reum grabbed a gold and silver in the mass start event the following day.

Lee Seung-hoon claimed his first gold medal from the Championship in the men’s mass start by finishing at 7 minutes, 18.26 seconds, just 0.06 seconds ahead of Arjan Stroetinga of the Netherlands. Lee had already claimed two silvers and one bronze from past Championships, albeit in the short track event.

Lee stayed behind until the final two laps of the race before making his way into the leaders group. Lee maintained his position in fourth place until the last corner. Squeezing through the inside of the lane, Lee outpaced Stroetinga and Alexis Contin of France to cross the finish first.

Lee’s main event was short track before he changed to mass start. He initially showed talent in the event when he finished first during the 2014-2015 World Cup series, which is unrelated to the ISU Championship. Despite his success, he was unable to medal in the championship.

This season, he is currently ranked a disappointing seventh in the World Cup series. But in his championship win, he showed his ability to race strategically, which he’d previously shown in short track events.

“I am excited to finally win the ISU Championships for the first time [in this event],” he said after the race. “My past experiences in short track really help in the mass start. I feel more confident about Pyeongchang.”

Kim Bo-reum quickly added another medal to Korea’s collection when she finished second in women’s mass start. The event was neck-and-neck until Kim made her final push in the last corner to pass Miho Takagi of Japan, finishing at 8 minutes, 17.66 seconds.

Kim also switched her main event from the short track to the mass start. She has been struggling with a knee injury she received during the Sochi Olympics, and ever since, Kim has had a hard time getting fully recovered.

“I can still feel little bit of pain in my knee,” said Kim. “But pain and injury are something that any athlete must overcome at some point in their career. I cannot help but notice how much other skaters have improved since the last Olympics. I will practice much harder and will also reap good results in Pyeongchang.”

In the mass start, three or more skaters complete 16 laps on a 400 meter track without designated lanes. Similar to the short track, skaters are often involved in intense physical clashes and have to be strategic about when they attack. Because of the similarities between the two events, short track skaters like Lee and Kim often transition well into the mass start.

Pyeongchang will be the first Winter Olympic Games in which the mass start is featured. South Korea is currently ranked second in the event with four wins from the World Cup series this season, according to the ISU. It is behind the Netherlands, who has dominated the event with nine World Cup wins.