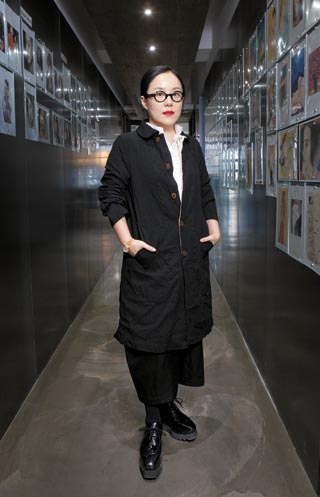 Korean makeup artist Jung Saem-mool poses for a photo at Jung Saem Mool Art & Academy, where she teaches aspiring makeup artists as well as those who are interested in K-beauty, located in Cheongdam-dong, southern Seoul. [PARK SANG-MOON]

Makeup artist Jung Saem-mool can claim a slew of notable achievements in the Korean beauty industry.

Not only has she worked with some of Asia’s top celebrities like Choi Ji-woo, Kim Tae-hee and Tang Wei, but she has also been running her own beauty salon and makeup academy where she shares her knowledge acquired from more than 25 years in the field.

Last year, she even visited Paris and New York to represent K-beauty at a program organized by Clinique and introduce makeup tips and trends from Korea’s beauty industry.

“Being on the sidelines in terms of beauty and fashion has lead K-beauty to achieve the success we have today,” the 46-year-old Jung said in a recent interview with the Korea JoongAng Daily at her academy, situated in the affluent Cheongdam-dong in southern Seoul.

“The epicenter of arts, beauty and fashion has always been European countries, but now they come to us and asking what our trends are. Knowing our weaknesses has lead me and many other beauty experts to try harder,” she added.

Most recently, Jung launched a cosmetic brand of her own which encapsulates the seven makeup principles - labeled Kod7 - she has developed during her career.

Here are the highlights of the interview in which she shared her beauty secrets and the road she has traveled to arrive where she is now.

Q. When you were abroad, demonstrating your own makeup and suggesting trends from Korea at various cosmetic forums, what were the responses? 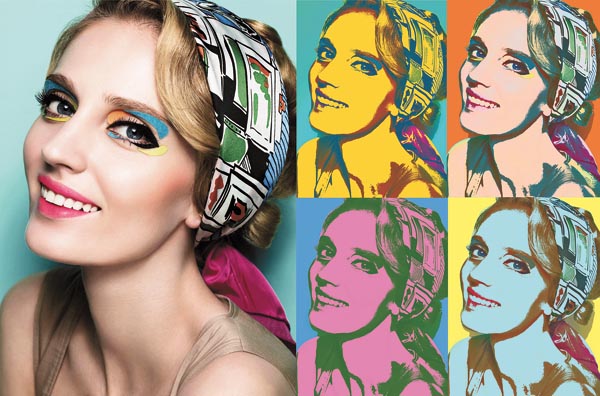 A. They were curious about everything about K-beauty. From how we do our basic skin care to how we express a clean skin complexion. They asked about what type of makeup is on trend right now in Korea. It was amazing to receive that much feedback from countries which have been far advanced in fashion and beauty compared to us. 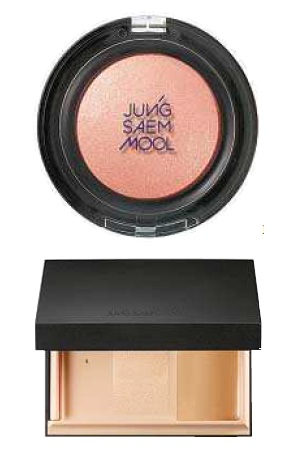 Jung launched her own cosmetic brand that includes products like Essential Tinted Paste, top, and Essential Star-cealer Foundation, above.

Skin care for sure. Most importantly, they were shocked to find that Korean women cleanse their makeup two times in a row, for example after using oil cleanser and then washing it off again with foam cleanser. Sometimes it was exaggerated to the point where they ask me if we use 20 to 30 products for skin care, but basically, the biggest difference I noticed was the number of skin products we apply to our faces. I think this is why Korean women have clean skin.

I’ve heard that your academy has students from around the world.

Yes, we have students from Hong Kong, Singapore, China and more who come here after completing a language course. Sometimes a group of beauty creators from Youku [a Chinese video-sharing website] come here and attend classes, some of whom have thousands of followers in their home country. When I hear them saying that they picked Korea over countries like England or France because they were curious about K-beauty, you can’t imagine the electrifying thrill I get.

You have begun to regularly appear on the MBC variety program “My Little Television,” where you demonstrate various types of makeup and give out simple beauty tips. How did you come to join the program?

I was pretty scared at first but the producer kept telling me that having expertise is all that matters on their program instead of having a humorous personality. Just when I was getting persuaded, my husband raised even more concerns because he knows how not-funny my personality is (laughs).

But in the end, I gave it a go and I think people found the fact that I maintain a serious attitude is actually the funny part. Every time I film an episode, I think to myself that this will be the last, but before I knew it, I have almost become a regular.

On the program, you always emphasize finding one’s “personal color.” What does that mean?

In Korea, I find so many women whose neck and face have different colors because they use too bright a color for their foundation. Especially, when I was running classes at my academy, I found that many students were not happy with their dark skin tone. I thought that kind of thinking was definitely not right and decided to run a long-term project that focused on helping them find their distinctive skin tone and express it beautifully.

After the project was over, I had many students coming to me saying that they never knew their dark skin tone could glow and seem healthy with the right makeup products.

You recently launched your own cosmetic brand which you said encompasses the seven principles - labeled Kod7 - that you have come up with. Can you explain it?

While studying fine arts for four and a half years at the Academy of Art University in San Francisco, I learned that there are certain rules for drawing and sculpting. Then I found out some of the same rules can be applied to doing makeup, which resulted in Kod7.

For example, the Essential Star-cealer Foundation, which is the representative product of our brand, gives you just the right amount of foundation when pumped to make your face look three-dimensional based on the “thin and thick” rule, which means that you apply the given amount of liquid first to parts with thick skin such as cheeks and chin, and then moving on to put the remaining portion on thin skin around the eyes and mouth.

What changed after studying fine arts and returning to your occupation as a makeup artist?

I was 36 years old when I went to San Francisco, which was 16 years after I started working as a makeup artist. At the time, I had my own shop and academy but there was that last 2 percent missing. When I did skin and color makeup before, the techniques were all out of my grasp. I knew that this color matched well with that, but there were no concrete ways to explain it, which frustrated me as well as baffled my students. But now that I know all the logic behind color combinations, I can clearly explain what I am going for. It was like a fog clearing out in my head.

You have worked with many celebrities as well. How do you apply your know-how when working with different stars?

I try to find their biggest charm that is not apparent to anyone. Having a pretty face is like a precondition for these stars, but behind that, this person has a very pure aspect while others have a very refreshing side. I believe that excavating these kinds of charms is my job and I try to maximize that in my makeup. For example, for Tang Wei, she has those mysterious brown-colored eyes among her very Asian black hair and thick eyebrows. I try to capture those exotic and Oriental aspects when doing her makeup.

Although it might be hard to say in a nutshell, can you suggest the most basic rule for maintaining clean and healthy skin?

I believe that you must be aware of your skin’s condition every day. And according to that condition, you have to cleanse differently and apply different products. For me example, if I have been outside for a long time, I cleanse my face two to three times. But when I’m confined indoors, I just wash my face with warm water. We don’t need to stress out the skin for no reason.

What do you think are the makeup trends for 2016?

There have been many trends laid out by diverse cosmetics companies, but I find some of them far-fetched to apply to Asian faces such as those using Pantone’s Color of the Year including Rose Quartz and Serenity [pale pink and pale blue]. Instead, I want to emphasize the unchanging beauty trend which is expressing flawless skin. Then I should say we should move on to point makeup, such as bold eye lines which can be at times a squared or rounded, and also brightly colored lipsticks.

What do you want to achieve in the future in the category of beauty?

Being in this industry for over 25 years has helped gain the specialty of finding something beautiful in all faces I come across. I want to sit in person with people who believe that they are not beautiful and enlighten them that it is not true. In a society like Korea where comparing has become so common, it is hard to develop your own standard in defining beauty. I want to be that person who can kick-start people’s minds into thinking of themselves as beautiful gems.

You seem to be as interested in inner beauty as you are in outer beauty.

They are inseparable from each other. I have seen so many stars who used to glow, but slowly lose that light when surrounded in bad rumors or something. I think focusing on inner beauty is just as important or even more so than decorating the exterior. If one can learn how to control inner agony and jolts, leading to a balance between interior and exterior, I think there is nothing more beautiful than that.