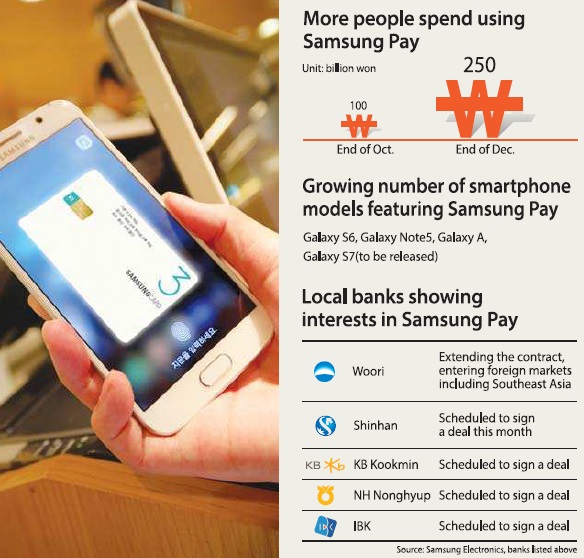 Local commercial banks are lining up to do business with Samsung Pay, the nation’s largest mobile payment system.

Domestic subscribers to Samsung Pay spent more than 100 billion won ($82.6 million) through the system within two month of its launch in August. In December, the amount rose to 250 billion won, and the number of subscribers surpassed one million in October, according to Samsung Electronics.

Currently, Samsung Pay only works with Woori Bank, but the exclusive contract between the two will expire next month, and now, more institutions are seeking to link up with Samsung Pay.

Samsung Electronics plans to expand a number of its smartphone models that feature the Samsung Pay system. More financial institutions are eager to get involved in this business as subscribers to the system, and the amount they spend, appear to be growing.

Shinhan Bank will sign an agreement with Samsung Electronics this month on doing business with the company’s mobile payment system. “We will launch a brand new Samsung Pay service after the company’s exclusive deal with Woori Bank expires,” said a Shinhan Bank representative.

KB Kookmin Bank is also getting involved. A bank official said they are currently negotiating with Samsung Electronics on the mobile payment system. The bank was told that other local banks such as NH Nonghyup Bank and Industrial Bank of Korea are also showing interest.

“We will try to enter into foreign markets, including Southeast Asia, with our past experience with Samsung Pay,” a Woori bank official said.

As the banks start to compete with each other, banking services such as transferring money and paying utility bills might be added to the current services.

“Samsung Pay already proved its credibility and easiness, and banks now want to use the mobile payment system, applying their own services such as money transfers,” said Kim Jung-hyuk, a team leader at the Bank of Korea’s payment system team.

Some local financial institutions believe using Samsung Pay is better than developing their own payment systems.

“Online payment service providers like Samsung Pay want to expand their share in the market by attracting more brick-and mortar bank users and vice versa,” said an industry insider. “They both feel the necessity of mutual cooperation.”

Traditional banks are in need of more customers that actually visit their premises. Some 89.3 percent of people used mobile banking or other online-based banking services to deposit, withdraw or transfer, while only 10.7 percent of them actually visited the banks to do so in the third quarter last year, according to the Bank of Korea.

Customers who use their smartphones for banking services continue to grow. A total of 4.23 million transactions worth 2.50 trillion won were made through mobile banking in the third quarter in 2015. During the same period, the number of transactions rose 3.2 percent, and the total amount involved rose 4.5 percent each from the second quarter of 2015.

Samsung Pay will also benefit if more subscribers sign up for the service. “Our subscribers enjoyed our system, which allows them to use their mobile phones to purchase items at offline stores,” a Samsung Electronics representative said. “Samsung will continue to cooperate with financial institutions in order to improve accessibility.”