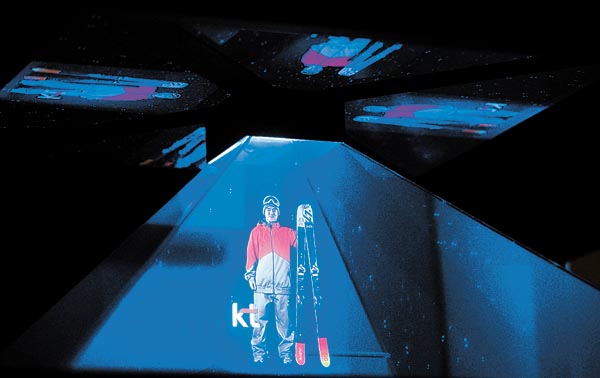 KT demonstrates a holographic interview with Chun Ho-young, a national slopestyle skier, at the telecom company’s headquarters in central Seoul on Monday. [NEWSIS]

During the 2018 PyeongChang Winter Olympics, spectators around the world will have access to a number of services built from the nation’s next-generation 5G wireless capabilities, including the ability to watch an event from the perspective of a competitor.

Telecommunications provider KT, an official telecom partner of the event, offered a peek into how it will deploy 5G-backed technologies such as 360-degree videos and holographic interviews to enhance the viewing experience.

“The latest technology that will be used during the Winter Olympics will take the viewing experience to the next level,” said Oh Seong-mok, head of the network division at KT.

One of the highlights is Sync View, which allows viewers to switch between two screens: one featuring the perspective of the competitor and the other being the regular broadcast. 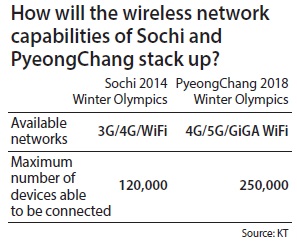 The service was made available by a 5G-supported technology called Active Antenna, which enables the transmission of ultra-high-definition video in real time.

KT said its 5G wireless connection will also support 360-degree videos, which are an increasingly popular type of content. The videos allow the viewer to look in any direction of a broadcast, enabling a more immersive experience.

Another 5G-driven service during the Olympics will be the so-called holographic interview, which will connect competitors and interviewers from afar.

It will send a 3-D projection of the competitor to the studio, making it seem as though they suddenly walked in for the interview.

The network service provider said up to 250,000 devices can be connected to its wireless network at the same time.

The maximum limit is almost twice that of wireless service at the Sochi Winter Games in 2014.

The company said it has completed about 30 percent of the construction and plans to finish the project this year to start trial services in 2017.

The telecom company hopes to use the global sports event as an opportunity to showcase its tech prowess, as the Olympics will invite around 6,000 athletes from 100 countries, as well as an anticipated 3.8 billion viewers around the world.