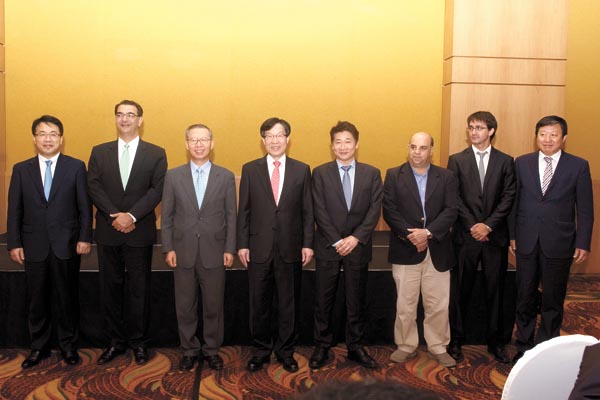 Posco, the nation’s largest steelmaker and the sole provider of lithium in Korea, is pushing ahead with plans to capture a major share of the global lithium business, the company said on Monday.

On Sunday, the steelmaker held a groundbreaking ceremony of its new lithium manufacturing plant at Salta City, Argentina. Company CEO Kwon Oh-joon and about 20 related government officials attended the ceremony.

“With Posco’s own lithium extraction technology and Argentina’s resources, the lithium business will become a promising growth engine for both Korea and Argentina,” Kwon said.

The new factory, located at the Pozuelos salt lake in Salta City, will produce 2,500 tons of high-purity lithium annually, which will be used to make electric car batteries. As roughly 40 kilograms (90 pounds) of lithium is used for each electric car battery, the total amount produced from the plant is enough to power 60,000 cars in a year.

The new plant, scheduled to be completed by the end of this year, will operate under Posco’s self-developed lithium extraction technology, which shortens the extraction process, which takes about a year using today’s methods, down to a month.

Posco first developed the technology using chemical reactions in 2010 and has been test producing lithium in various salt lakes over the years. It succeeded in producing 200 tons of lithium at the Cauchari salt lake in Argentina last year.

The world’s lithium market has been growing from 70,000 tons in 2012 to 170,000 tons in 2014, and it is expected to grow further into a 270,000 ton market by 2020. The lithium materials market for batteries in electric cars will account for nearly half of the worldwide market by 2020, the company said. With China and other developed countries crowding into the electric car sector, demand and sales of electric cars, and lithium supply for their batteries, are forecast to further increase.

Until now, Korean battery makers have been suffering from unstable supplies and price hikes of lithium since they were wholly dependent on imports. A new supplier in the market is welcomed by the industry, and some are already beginning to talk about the possibility of supply contracts.

The 106-square-kilometer (26,000-acre) salt lake in Argentina has 1.5 million tons of lithium reserves. Posco secured the rights to exploit the lake by inking a base material supply contract with Lithea, an Argentinian company that holds the mineral rights to the lake.