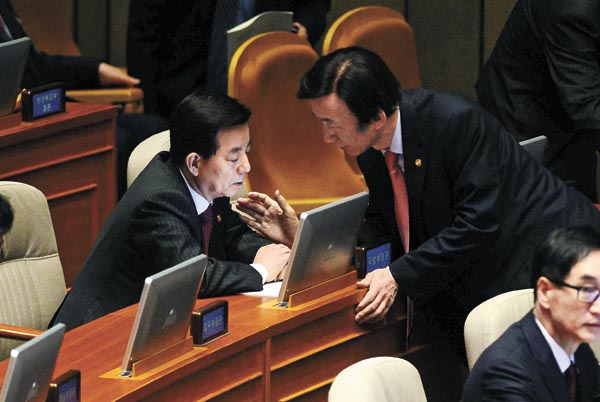 At a meeting of the parliamentary National Defense Committee, Minister Han Min-koo said that Korea and the United States are in the midst of consultations to manage a joint working group over deployment of the Thaad battery on the Korean Peninsula.

“In launching the joint working group, we will review issues such as the location and management of the battery,” he said.

“Military usefulness and the geographical conditions most suitable for operation are the most important elements” in determining its placement, he added.

Seoul and Washington announced after Pyongyang’s long-range missile test on Feb. 7 that official talks would begin immediately on Thaad’s deployment.

“Military usefulness, rather than taking into account the positions of neighboring countries, signifies placing [the Thaad battery] in the optimum location from a military perspective,” a Korean military official said.

The U.S.-led antiballistic missile system comes with a powerful radar system that can cover more than 1,000 kilometers (621 miles). Its placement on the Korean Peninsula has been controversial, however, with both China and Russia expressing concerns that the radar could be used as a possible method of surveillance against them.

The battery will most likely be placed in Wonju, Gangwon, according to a high-ranking official from the ruling Saenuri Party. “Some media outlets have mentioned Chikgok or Waegwan [Camp Carrol] in North Gyeongsang; Gunsan, in North Jeolla; and Pyeongtaek in Gyeonggi. But considering military usefulness, the Wonju region in Gangwon is most suitable.”

The source added, “Officials from the U.S. Department of Defense conducted a field investigation in Pyeongtaek, Wonju and Busan last year. It is known that the United States is of like mind.”

A Defense Ministry official also noted that the battery would be placed in “a suitable location to reflect the Korean Peninsula’s mountainous topography.”

“It could be placed outside of U.S. bases,” he said, indicating that it may be placed in a location other than the Pyeongtaek base, which has most frequently been considered as the likeliest spot.

The official added that should North Korea launch a submarine-launched ballistic missile from the northern East Sea, it could be detected and intercepted via the Thaad system.

Similarly, operating the Thaad battery at a higher altitude could help curb worries about harmful electromagnetic waves emitted from the AN/TPY-2 X-Band radar and would have less impact on civilian aircraft.

Han reiterated Monday that electromagnetic waves from the radar were “a level that warrants no concern at all.”