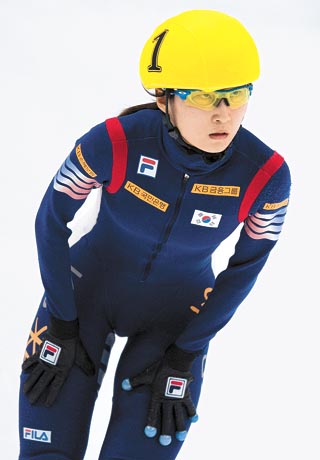 With the 2018 PyeongChang Winter Olympics only two years away, one of Korea’s most prominent hopes for a gold medal is the 18-year-old Choi Min-jeong. The ace of the national short track team is nicknamed the “ice princess” because her face stays neutral even after a big win. Even outside the track, she’s known for keeping her emotions in check, and this was certainly the case during a recent interview at the Taereung Training Center. Wearing her trademark horn-rimmed glasses, she nonchalantly expressed her desire to top the upcoming Games.

Short track is traditionally a gold mine event for Korea during the Winter Olympics. Among the 26 gold medals that Korea had won through the 2014 Sochi Winter Olympics, 21 came from short track. Naturally, Korea is yet again expecting a good result from its team at PyeongChang. The women’s team is led by Choi and Shim Suk-hee, the 19-year-old from Sehwa Girls’ High School, who are particular gold-medal favorites. During the 2015?16 International Skating Union (ISU) Short Track Speed Skating World Cup series, Choi has been on a medal spree. She recently added two silvers to her shelf for this season, placing second in the 500 meter and 1500 meter events in Dordrechet, Netherlands on Sunday.

The skating styles of Choi and Shim are completely different. Shim, standing tall at 1.75 meters (5 feet 7 inches), takes the lead from the start and keeps others in check during the entire race. For being so young, Shim controls the pace of the match impressively well. In contrast, Choi likes to exploit her explosiveness in the final moments. Choi penetrates from the outside and passes her opponents from where it is least expected. For this reason, Choi is strong in the 500 meter, an event in which other Korean skaters are relatively weak. “Others say it is difficult to pass from the outside,” said Choi. “But for me, I like the outside better. I’m only 1.62 meters (5 feet and 3 inches) and physically not so strong. So I don’t like to tussle with other skaters. I prefer to stay behind and outpace them later in the match. This is why I am especially aggressive in the final moments, even during practice.”

Choi’s motto is “no pain, no gain,” and she lives up to her philosophy. Choi suffered from an ankle injury after falling during the 2014 World Junior Championships in Erzurum, Turkey. However, she bounced back to claim victories the following year, including the gold at the World Short Track Speed Skating Championships in Moscow, Russia in March 2015.

Choi began skating when she was just 6 years old. What started out as a seasonal hobby became her career. “I never expected to be a professional skater,” said Choi. “Frankly, I have to give the credit to my parents for their support and love.”

As her nickname suggests, Choi is not interested in things other than skating, nor is she an ordinary teenage girl infatuated with Korean boy bands and celebrities. Choi said she doesn’t even know all the members of Exo, a popular Korean idol group. The only hobby she enjoys to let off a little steam is reading books. Choi recently finished “This Very Instant” by Guillaume Musso. “I don’t really like watching TV or listening to music,” commented Choi. “But I do like to read. It relaxes me.” She is also meticulous when it comes to her training. She writes down the details of her daily training every night before going to bed.

Choi’s dreams of winning an Olympic gold began with Jin Sun-yu, the former short track star and current coach for DanKook University. Jin won 3 medals at the 2006 Winter Olympics in Torino. Watching Jin at the top of the podium, Choi began to push herself harder, dreaming of standing atop the podium herself in 2018.

She is determined to turn that dream into reality. Choi and Shim visited the short track arena under construction in Gangneung in late 2015. Choi wanted to take a look at her future battlefield. Choi also wears a ring with the Olympic emblem everywhere she goes. This is to help her focus whenever she is distracted.

“My goal has never been clearer since my trip to Gangneung last year,” said Choi. “I will make sure that after the 2018 Winter Olympics when people think of ‘short track,’ they will instantly think of my name.”