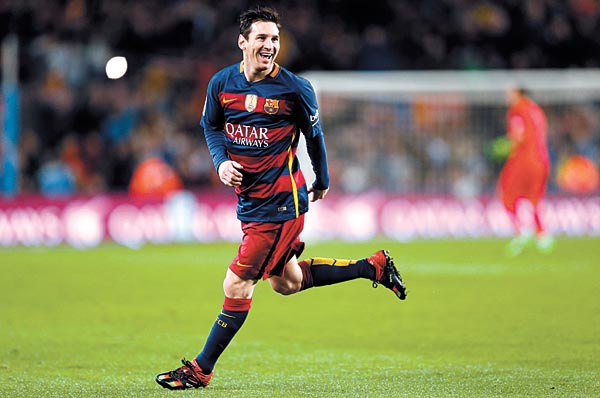 MADRID - Lionel Messi attracted global attention with the trick penalty kick he pulled off with Barcelona teammate Luis Suarez in the latest round of the Spanish league.

Messi took the spot-kick on Sunday but, instead of a shot, he simply rolled the ball to the side for Suarez, who rushed in from outside of the box to easily score past the Celta Vigo goalkeeper.

The play divided opinion, seen as either part of the soccer spectacle or disrespectful to the opposition.

“I don’t think it was disrespectful,” Barcelona midfielder Andres Iniesta said. “It’s unusual, but it can be done that way. We have always respected our rivals and the players we play against. I don’t think there should be a debate about this.”

The play happened with Barcelona leading 3-1 at the Camp Nou, going on to win 6-1.

“I was bothered because they scored, not because of the way they did it,” Celta defender Gustavo Cabral said after the heavy defeat.

Celta coach Eduardo Berizzo said it was a “different” way of taking the penalty, “nothing more.” Barcelona coach Luis Enrique admitted that some people won’t like what was done, but “it’s a legal play.” He noted that Barcelona players always think about the “spectacle,” not only about winning games and titles.

“I wouldn’t do it that way because I would step on the ball and fall,” said Enrique, a former Barcelona midfielder.

Home fans certainly liked what they saw, and the play quickly went viral on social media. It made headlines on sports pages across the world on Monday, and Barcelona said that it started a campaign on Twitter, Facebook and Instagram to give a name to the Messi penalty.

The play became famous after Johan Cruyff executed it while playing for Ajax in 1982. Many said Messi was paying a tribute to the former Barcelona idol.

“I don’t think Messi was trying to copy anyone,” Iniesta said.

Arsenal players had attempted a similar trick in a penalty kick in a game against Manchester City in 2005. But Robert Pires wasn’t able to properly get the ball to Thierry Henry and Arsenal failed to score - the biggest risk with such a play.

Neymar said Barcelona previously practiced the play but it was originally intended for him to score.

“That play had been rehearsed and it was supposed to be for me,” Neymar said. “The most important thing is that the play worked.”

By giving the ball to Suarez, Messi passed on a chance to score his 300th goal in the Spanish league. It gave the Uruguayan striker his league-leading 23rd goal.

It was unlikely the play would count as a missed penalty for Messi. The Spanish league said “this situation is not covered by La Liga’s rules, hence there is no ruling on how to define it,” but the league decided to call it an assist for Messi on its official website. The company that keeps statistical records for the league has also recorded it as such.

There was nothing illegal about passing the ball to a teammate from the penalty spot, but replays showed that Suarez appeared to have entered the box before Messi touched the ball, which would be illegal. A Celta player also appeared to enter the area too early, so the referee could have asked for the penalty to be retaken.

According to soccer rules, a few conditions must be met in such cases, including that the ball moves forward and that no other player other than the goalkeeper and the penalty taker _ who must be previously identified _ enters the box before the ball is touched for the first time. The penalty taker is not allowed to touch the ball for a second time until another player gets to it.