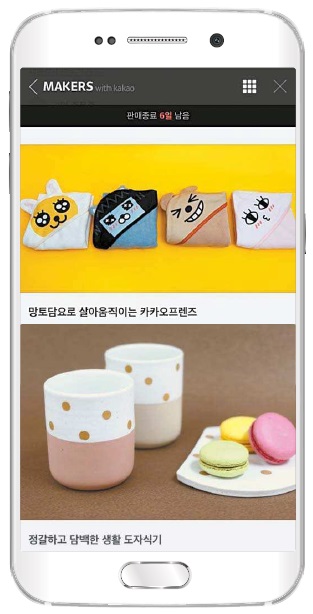 Kakao, the operator of the nation’s leading mobile messenger app, is hoping to change the manufacturing industry by directly connecting consumers with producers of goods through a new service called “Makers with Kakao.”

Launched on Tuesday, the service allows manufacturers to upload products to a website operated by Kakao (http://makers.kakao.com), which can then be viewed by potential customers. New items are uploaded every Tuesday, and sales last for one week.

The companies only begin manufacturing the product once an order is placed by one of KakaoTalk’s 48 million users, and delivery could take up to two weeks.

Kakao said the service will cut costs for companies because they won’t have to manage an inventory, and consumers will see those savings translate into cheaper prices.

“When we met people in the manufacturing industry, we realized that many struggle to maintain their business even when creating products based on a good idea because of inventory problems,” said Cheon Seok-won, head of the social impact team at Kakao.

“We have high hopes for our preorder system Makers with Kakao.”

Makers with Kakao is the first service created by Kakao’s social impact team, first announced in November 2014. According to the company, the team was the brainchild of Chairman Kim Bun-soo, who wanted to make it easier for innovative ideas to generate social change and financial success.

The company said it has already signed agreements with seven manufacturers, 12 brands and 10 artists. Items currently include Samson markers, a bag made out of a fire hydrant hose, a blanket printed with Kakao Friends and a “Duckoo” art toy that costs 500,000 won ($410).

The blanket has already received 122 orders as of 6 p.m. Tuesday, while the art toy has 105 orders.

Kakao said one of the main draws of the service is the rarity of the products offered.

Items featured are available exclusively through Makers with Kakao, and the seven-day limit is expected to heighten interest in the service, as well as encourage users to visit frequently.

The company said it plans to further expand strategic partnerships with popular artists to feature their designs on the service.

Kakao also said Makers with Kakao will help boost the local manufacturing industry, which has been losing ground to companies in China and Southeast Asia.

The company said it has secured production plants in Changsin-dong, Bomun-dong and Yongdu-dong, neighborhoods located near central Seoul famous for their small manufacturers.

Kakao said once orders on the platform increase, it will expand cooperation with the facilities to hire more workers with stable salaries.

Makers with Kakao is one of several expansions the company has been making to diversify its offline business portfolio.

Other recent moves have included a fruit delivery service from Jeju Island and a platform to connect customers with beauty salons.