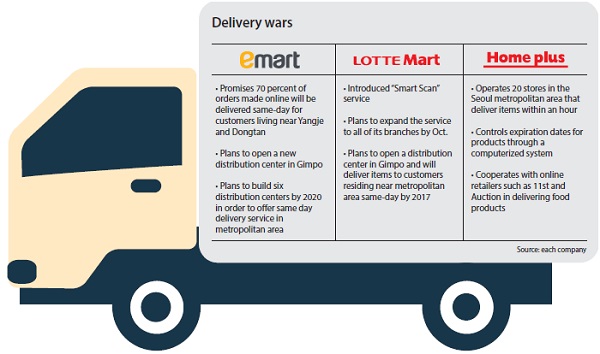 Coupang’s winning strategy was its so-called Rocket Delivery, which guaranteed overnight shipping. In response, online retailers and even supermarkets have now upped the ante by offering same-day shipping services to their customers.

The size of the local social commerce market rose to 5.5 trillion won ($4.5 billion) in 2014, up from 790 billion won in 2011, according to a Korean online shipping association. The association projected that it reached nearly 8 trillion won last year.

Some of the larger discount stores now offer direct delivery service to customers from their own distribution centers.

E-Mart, which has a distribution center in Yongin, Gyeonggi, delivers 70 percent of its online orders the same day to customers living around Yangjae-dong, southern Seoul, and Dongtan in Hwaseong, Gyeonggi.

The store plans to open a new warehouse to better process online orders in Gimpo, Gyeonggi, later this month. The distribution center will be used to deliver items to customers living in northern Gyeonggi and western Seoul.

“We will open six new distribution centers in the metropolitan area near Seoul by 2020 and offer same-day shipping service to the whole area,” said Kim Yoon-sup, a public relations manager at E-Mart.

Lotte Mart is testing its “Smart Scan” service at its three stores in Seoul. Customers can scan price tags with their smartphones at the store and purchase items through the app. Those items will be delivered within two hours after the transactions are processed.

Lotte Mart started the service to help customers enjoy shopping at the store without the inconvenience of lugging around goods with them. The discount store plans to offer the service at all of its 117 branches around the nation by October.

In addition, Lotte Mart will operate distribution centers for online orders. The company plans to build three warehouses by 2017. “We will be able to offer same-day shipping in the metropolitan area near Seoul by then,” said Kim Moon-gyu, a public relations manager at Lotte Mart.

Homeplus, on the other hand, is not interested in operating distribution centers for online orders. Instead, each branch delivers items in stock to customers residing nearby.

Homeplus ran its “Quick Delivery” service at two of its stores in Seoul last year and plans to expand it to 20 branches in the metropolitan area near Seoul. The service delivers purchased items within an hour using motorcycles. Large items can be delivered on the same day if the order is made before 4 p.m.

Smaller supermarkets are hoping to gain a competitive edge by promising to deliver goods ordered after 6 p.m. within a few hours.

Lotte Super ships within three hours if an order is made before 7 p.m. The supermarket will lower the time to two hours for its four branches located in the Seoul metropolitan area on Wednesday.

GSiSuper’s 281 branches around the nation also deliver within three hours if an order is placed before 6:30 p.m.