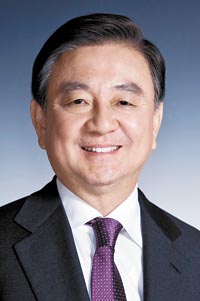 Hong Seok-hyun, the chairman and CEO of the JoongAng Media Network, the largest media group in Korea, will receive an honorary doctorate from Pohang University of Science and Technology (POSTECH), the first for a South Korean national.

POSTECH announced Tuesday that it will award Chairman Hong an honorary doctorate degree in engineering in appreciation of his contributions to social development in various fields as an engineering graduate.

He will be honored during the university’s graduation ceremony on Friday morning at its gymnasium in Pohang, North Gyeongsang.

“Chairman Hong Seok-hyun has advised young people to work toward a creative life and has proposed to the government the establishment of a start-up ecosystem, in seeking to pave the way for our talented future generations,” explained Kim Byeang-hyean, the dean of POSTECH’s Graduate School.

Born in 1949 in Seoul, Hong is a graduate of the department of electrical and computer engineering at Seoul National University. He received in master’s degree in industrial engineering and an economics doctorate from Stanford University.

Hong previously worked for the World Bank and the Korea Development Institute.

After taking over as president and publisher of the JoongAng Ilbo in 1994, he spearheaded major innovations in South Korea’s media industry and contributed to the newspaper’s expansion to become a global media network.

He was the first figure from Asia to be named president of the World Association of Newspapers and News Publishers, a term Hong served between 2002 and 2004.

Chairman Hong also served as ambassador to the United States in 2005.

POSTECH, where Chairman Hong served as a corporate director in 2001, has given out three honorary doctorate degrees so far.

The university, it said, plans to award the degree not only to globally renowned scholars, but to figures who have embodied human values through their work and served as remarkable role models for students.